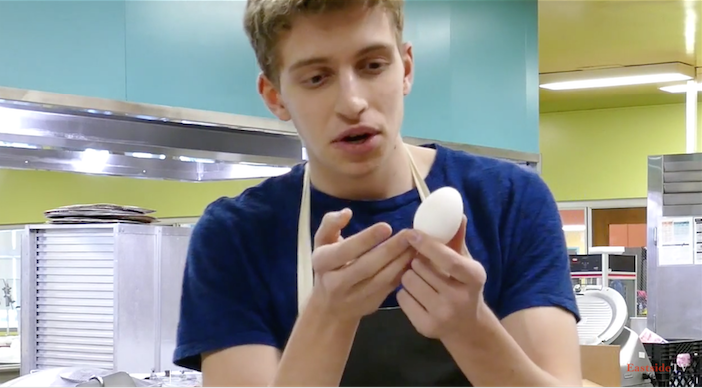 Luke Bonanni (‘15), also known as Mr. Luke At Me Now is your typical baker. He is not inspired by the “fake bakers,” as he calls them, that populate the Food Network and are household names.

“My biggest pet peeve is people who try to act like they can cook and bake but are actually just posers. Okay, don’t listen to them. Like, I know you see these people on TV, like Guy Fieri and Gordon Ramsey, but they are just there for the money and their personality, they can’t actually cook. So my biggest pet peeve is when they act like they cook but they are actually just posers,” he said.

He truly appreciates great cooks. Bonanni explained that his favorite type of pizza is Sicilian white cheese with broccoli because he has been told that it is one of the most difficult pizzas to make.

“I appreciate the craft that goes into it. I know when I take a bite into it, that it took effort to make, and that makes the experience that much better,” he said

Bonanni believes he can achieve his life goals, which are to “get rich, get women and get famous” by utilizing his baking talents to the fullest extent. He hopes to begin achieving those dreams on the Mr. East stage.

“I want to show everyone I am the best baker in the world, so I hope to achieve that. I hope to achieve fame or infamy on the hallowed stage of our Cherry Hill East theater,” said Bonanni. “Everything is not as it seems. The audience can expect that most of the jokes have double meanings, so be prepared.”

And why should Bonanni win Mr. East?

When it comes to choosing a favorite thing to bake, Bonanni has to pause and think, as he knows how to make hundreds of different pastries and desserts. He explained it is difficult to choose a favorite.

“When I bake I use industrial size mixers and ovens, so it’s much harder for me to bake at home in a kitchen versus a big kitchen [at work] where we bake a lot of things at once,” said Bonanni. “I guess my favorite thing to bake would be the cream for our cream donuts. It is very fun, and you get to weigh everything…for example I don’t like sweet things so sometimes I’ll put a little extra salt in it. It’s fun to dictate what our batch is going to taste like.”

“’My personal motto is ‘bake what you want’,” Bonanni said. “In other words, be yourself, do what you want to do and don’t worry about anyone else. Like if someone tells you ‘Luke, this cake is disgusting’ you don’t listen to them, you say ‘no it’s not’. If you want to put broccoli and steak inside that cake, you do it, you bake what you want.”