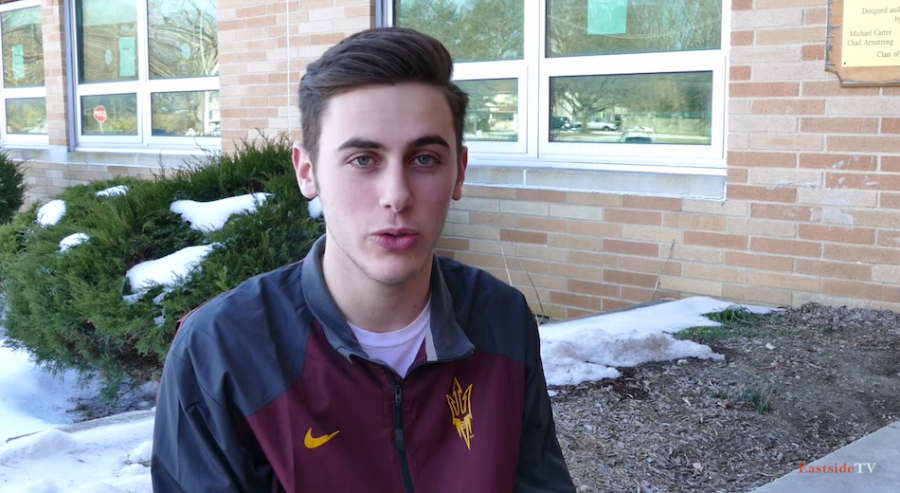 Slipping into a super stretchy suit and gelling his hair, Kyle Billigg (’15), also known as Mr. Late Night, puts on a wide grin and prepares for his very own talk show called “Kyle Billigg.”

Billigg said that “Kyle Billigg,” proves to be one of the most important part of his life as he enjoys filming himself and relaying important, comedic information to his viewers.

“If I were on a desert island, I would most likely have my camera with me… I have to film my talk show,” said Billigg. “My show’s on NBC, but no one can see it. It’s a secret.”

Unlike other contestants, Billigg revealed very little information regarding his performance for the twenty-eighth annual Mr. East competition.

“Through Mr. East, I want to show my fellow classmates what I am made of,” said Billigg. “That’s why everyone will have to find out what my true talents are by coming out to see the event.”

However, Billigg did say that he hopes to present his skills and abilities to prove that he can create a positive impact on the world, especially because one of his dreams is to transform society so that it is a better place for children to live in.

“I want to definitely change some things about entertainment, food and technology today. I think there is always a lot of room to improve the world for the young kids,” said Billigg.

As a certified chef at Benihana, Billigg is already working to accomplish one facet of his dream by creating better food for all his customers.

Through Mr. East, I want to show my fellow classmates what I am made of…that’s why everyone will have to find out what my true talents are by coming out to see the event.”

Billigg said that the best word he would use to describe himself would be “varietative,”

“I might have just made that word up, but it definitely shows who I am,” said Billig. “I mean, I can ride my 28 inch unicycle, I cook and I also have my own late night talk show.”

Billigg even performs magic on his talk show, amazing audience members with his unique abilities.

There are only three days left until the Mr. East pageant. Be sure to come out to see Billigg showcase his talents as he takes one step closer to changing the world.