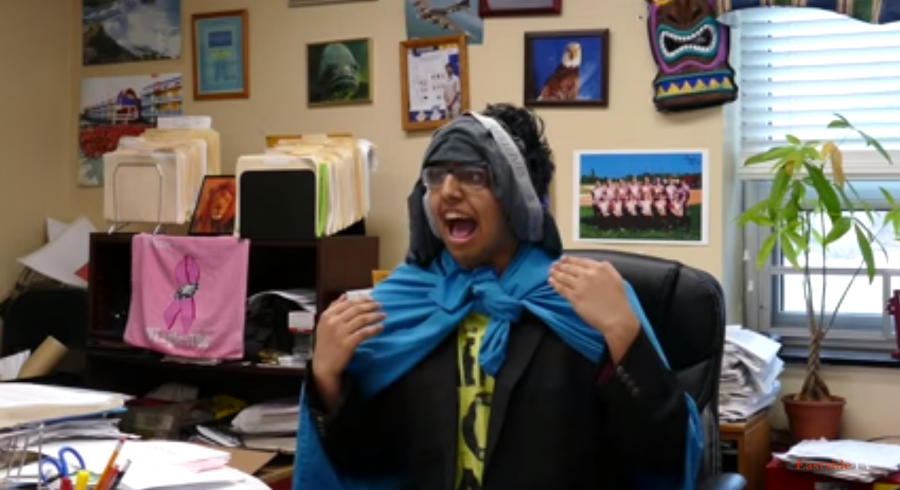 Adorned in a cape and with a pair of fresh boxers on his head, Asuri clearly has the courage to win this heated competition. To coincide with his courage, Asuri has full confidence that East citizens will abandon his current moniker to call him the victor of Mr. East 2015.

As the winner of Mr. East, I aim to encourage young children everywhere to proudly wear underwear on their heads and have them embrace their own unique superpower”

“I have a lot of things planned in my performance,” said Asuri. “Let’s just say that the audience will be in for some certain secrets of my origin and my adventures, and perhaps I will even be able to defeat my greatest nemesis, the arch-villain Señor It is. The audience will also meet my sidekick Boxer Boy.”

Asuri already planned out how he will influence East once he triumphs against his other competitors and wins the first place crown.

“As the winner of Mr. East, I aim to encourage young children everywhere to proudly wear underwear on their heads and have them embrace their own unique superpower,” said Asuri.

With the Mr. East competition slowly approaching, Asuri reflected on his past four years at East and his greatest accomplishments.

Asuri said, “Upon entry of the East hallways, I have been found saving the citizens of East and conquering the problems they have encountered on a daily basis between the hours of 7:30 a.m. and 2:30 p.m.”

Once graduating from East and outcompeting his competitors, Asuri hopes to continue following his dreams: guiding East citizens towards a better future.

“When I’m not enjoying my lazy Sundays or browsing through underwear catalogues, I’m doing what I love to do, and that is defending the citizens of East from the C-wing stampedes, the strenuous workload, and the unconquerable Señor Itis, and I plan to serve my duties even after I graduate” said Asuri.

Although Asuri could not divulge much information about his personal life in order to conceal his secret identity, he guarantees an unforgettable performance that will even incorporate his favorite song to sing in the shower.

Make sure not to miss the opportunity to see Mr. Boxers and Briefcase on March 27 in his mission to finally overcome the vices at East.