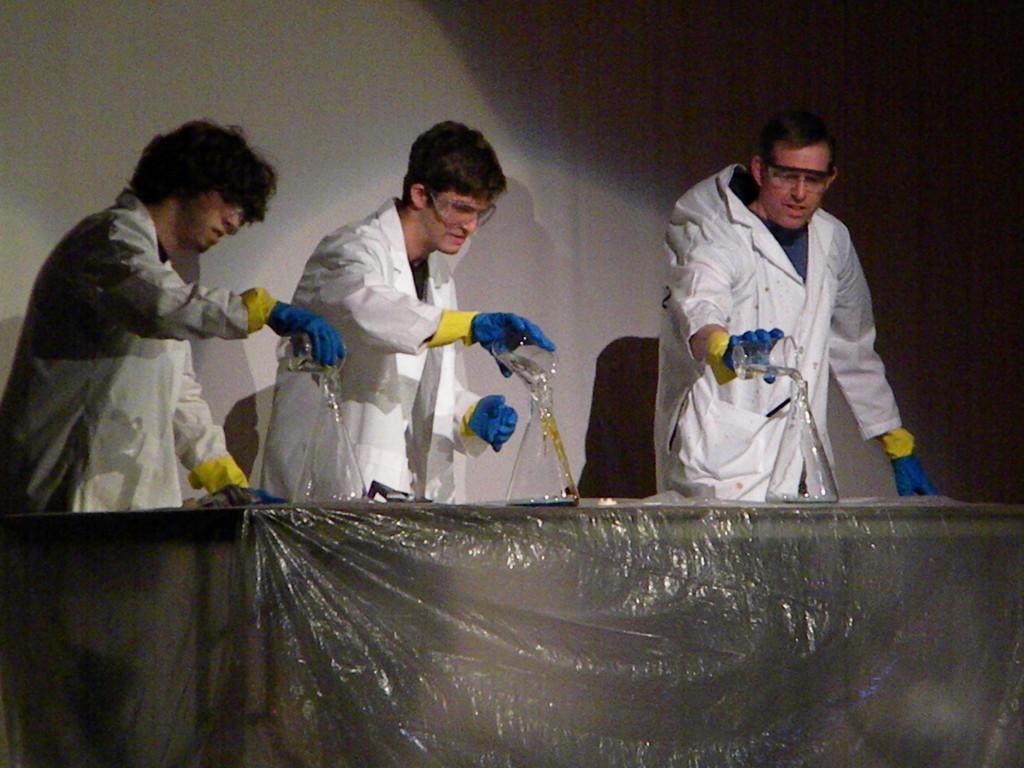 The show began with a reminder of everyday heroes, as all of the proceeds from the show were donated to D’s Dawgs, a charity that raises money for pediatric aneurism research in honor of Danielle Bledy.

Starting the show off with the nation anthem, Key of She began the contest with a high note. Interrupting the start of the performance, the evil Dr. Docolone, played by SGA advisor Mr. Mike Dappalone, stole the stage and threatened to quell school spirit. Determined to stop the villain, The JustEast League fought back with a great opening dance.

Leading into the next part of the show, a documentary of the heroes’ teachers and family members informed the audience of when the contestants first showed signs of their superpowers. Then, the contestants flaunted their bathing suits in the swimwear competition. From sun tanning on a boat to learning new chemistry problems, the heroes completed their first challenge with supernatural ease.

However, the true strength of their powers was revealed in the talent acts. Leading the way, Athias sang a powerful duet with Namarah McCall (’11) to Rihanna’s “Umbrella”. After singing, Athias danced to a medley of songs including classic pop numbers by Michael Jackson and club techno beats.

Hosting and starring in his own show, “Bradurday Night Live,” Cutler stirred up the audience with his hilarious stand-up comedy. He finished his act with a full musical performance by playing songs on the piano, accordion and guitar.

Transporting back to the real world, Desrochers applied a scientific approach to his act. With the help of his side kick Frankenstein, Mr. Greg Rouen, Desrochers created a glow-in-the-dark liquid, firing rockets and a ceiling-high foaming volcano-like reaction.

After the 15-minute intermission, Jackson, dressed in a sleek white tux, decided to dance, sing and rap with the help of his pals to transform into a ladies’ man. Kauth, with his fans Chris Santo (’11) and Jake Gurkin (’12), comically tried to dougie and flaunt his basketball skills. With a little help, Kauth discovered his talent for beat-boxing and rapping.

Levy’s witty humor won the crowd over with side-splitting laugher.

Jackson and friends did a routine to try to find — and highlight — Jackson’s talent, trying out both singing and dancing.

Sardone wowed the audience with an out-of-this-world dance. Glowing in the dark, Sardone seemed to be floating as he moved to a mixture of hip-hop songs.

Ending the talent portion on a high note, Tarnopol played the drums to a combination of songs, including Vampire Weekend’s “A-punk” alongside his brilliant band.

Wrapping up the competition, the heroes shed their superhero costumes. With two roses in hand, one for their mothers and one for their beautiful escorts, each contestant modeled Executive Clothiers formalwear.  Still dressed to the tie, the contestants completed the last section of the competition: question and answer. Jackson asked for a tissue, Sardone revealed his secret identity, and Tarnopol answered the last question with a simple roar.

As the contestants waited patiently for the results, the heroes performed one last time. Together they sang Billy Joel’s hit “The longest time.” The contestants listened while linked arm in arm, as the lovely chairladies, Katie DeMalo (’11), Heather Hyon (’11), Emily Knecht (’11) and Sarah Wint (’11) revealed the results of the competition; Levy won third, Desrochers secured second place, and Chang was crowned as Mr. East 2011.