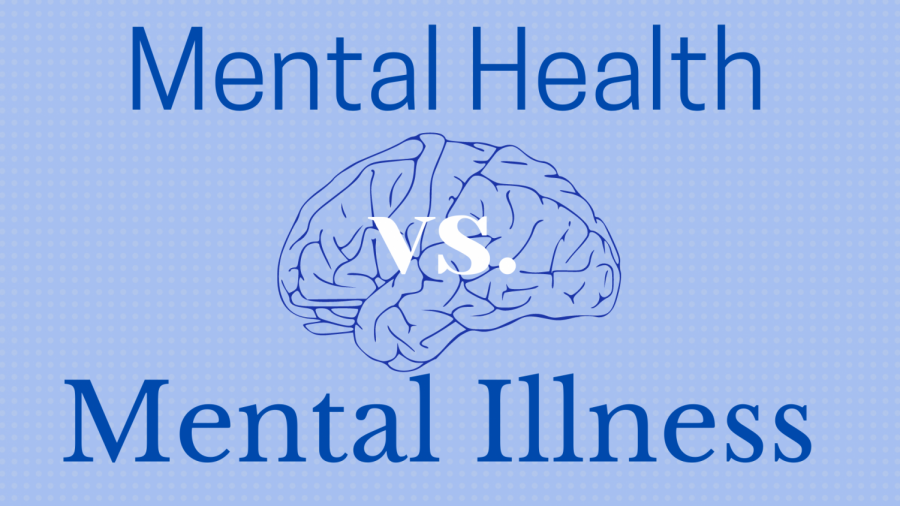 Especially during the pandemic, many people have been throwing around terms like “mental illness” and “mental health” without having an exact idea of what each of these terms mean, and the importance of a distinction between the two. Being able to differentiate between the two seemingly-similar ideas is crucial to understanding who we are and how we behave. So, let’s dive into important distinctions between the two.

To start, it’s crucial to understand what each of these words mean. The Center for Disease Control (CDC) defines mental illness as “conditions that affect a person’s thinking, feeling, mood or behavior” while it defines mental health as “ our emotional, psychological, and social well-being.” The main difference between the two is that mental illness is a diagnosable disorder which someone has, while everyone has mental health which they should strive to improve. Perhaps it’s simpler to understand by removing the word mental. Illness means specifically there is something wrong which diverges from your average healthy self. Health in general is simply your wellbeing. So, while everyone has mental health, not everyone has a mental illness.

However, another important distinction between the two is that mental illness is more binary than mental health. In most cases, someone is either diagnosed with a mental illness or not. While the severity of the illness in it of itself is scalable (some people may suffer from severe depression or anxiety while others may have less severe forms of this), generally a diagnosis creates a binary where you either have it or you don’t. In mental health, because everyone has it, it is scalable. Some people may have very good mental health, while others may be struggling more. This is similar to physical health, where someone may be diagnosed with an illness (of varying severity), or may generally just be unwell (of poor health). Therefore, someone can be struggling with mental health, without specifically being diagnosed with a mental illness.

It is crucial to understand the essence of this because respecting the nature of mental health is crucial for respecting those who suffer. Just because someone is stressed, does not mean they have diagnosable anxiety. Just because someone is sad does not mean they have depression. While someone may be struggling, it does not equate to a diagnosable mental illness. Again, struggles with mental health must still be treated seriously, however out of respect for those who struggle with those illnesses, people should refrain from lightly tossing around phrases like “I’m depressed” or “ he’s anorexic” without greater understanding or context for what it actually means to say such phrases.