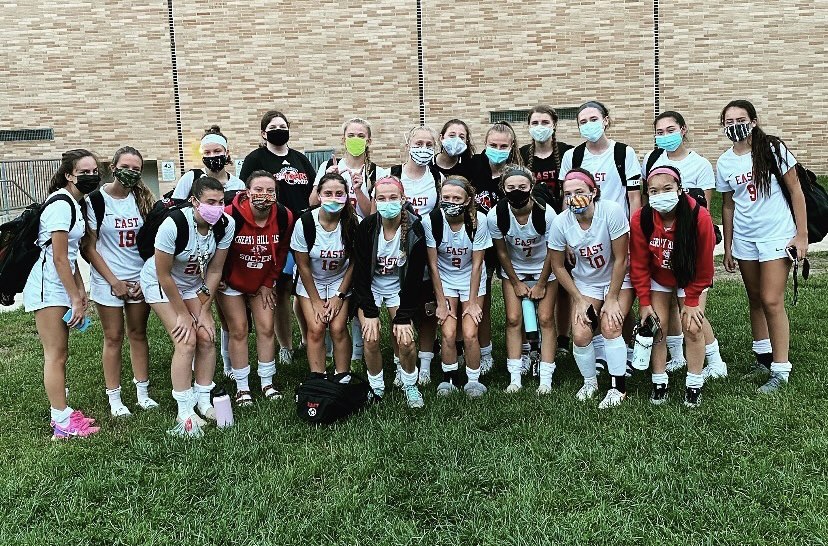 The girls soccer team made the best of their season and worked harder than ever.

Recap:
2020 was definitely an unforgettable season for the East Girls Varsity Soccer Team. The soccer season was like no other considering all the COVID-19 restrictions. However, the girls persevered and made the best of the unfortunate situation. Despite COVID, the girls soccer team was still able to play in all their scheduled games. Unfortunately, the team didn’t win as many games as they hoped, leaving them with a record of 5-9. With this being said, they were eliminated early in the regional playoffs. However, they still gave it their all and tried their absolute best until the very last second of the season. The East Girls Varsity Soccer Team all agreed that the highlight of their season was defeating Camden Catholic on their senior night. This was a big confident boost and motivated the team for games later in the season. Despite this major win, the team still played inconsistently and struggled to win consecutive games. At the end of the season, East Girls Varsity Soccer Team recorded an overall of 25 goals and 20 assists. They also managed to earn 105.5 power points, which is the way the State weighs wins and losses. This left the team 11th out of 20 teams in the Group 4 division. Although the team didn’t do as well as they hoped, each member of the team still feels very fortunate to have a soccer season and spend time on the field with their teammates. The East Girls Varsity Soccer Team hopes to have a ten win season and win the playoffs in the 2021 season.

Strengths:
This was a very hardworking team with the love and passion for soccer. Despite the challenges of this season, all the girls worked very hard and showed up to each practice ready to work, even though they had no idea what the season would hold. The East girls soccer team had a high number of goals and assists this season: 25 goals and 20 assists. Not only that but the team was very hard working and persistent. They never game up and fought their hardest until the very end of each game. During the senior game against Camden Catholic, the two teams were tied during the second half. However, the East Girls Varsity Soccer Team worked even harder to score and secure the win. Overall, the East Girls Varsity Soccer Team will always be remembered for their grit, dedication, and perseverance.

Weaknesses:
The East Girls Varsity Soccer lacked consistently. Some days they played great and other days they didn’t. The team couldn’t figure out what to do to consecutively win games. Not only that but, the East Girls Varsity Soccer Team always allowed the opposing team to score first. This was a major setback each game because the East Cougars always had to work even harder to catch up to the opposing team. This was both mentally and physically draining. Another setback for the East Girls Varsity Soccer Team was the lack of team bonding. Due to COVID, the team couldn’t have their traditional bonding activities. This impacted the team, because the girls were not as close as past years. The team was unable to hold their annual psych parties or attend pre-season practices. This was very upsetting because the team bonding is one of the best parts of being a part of the team.