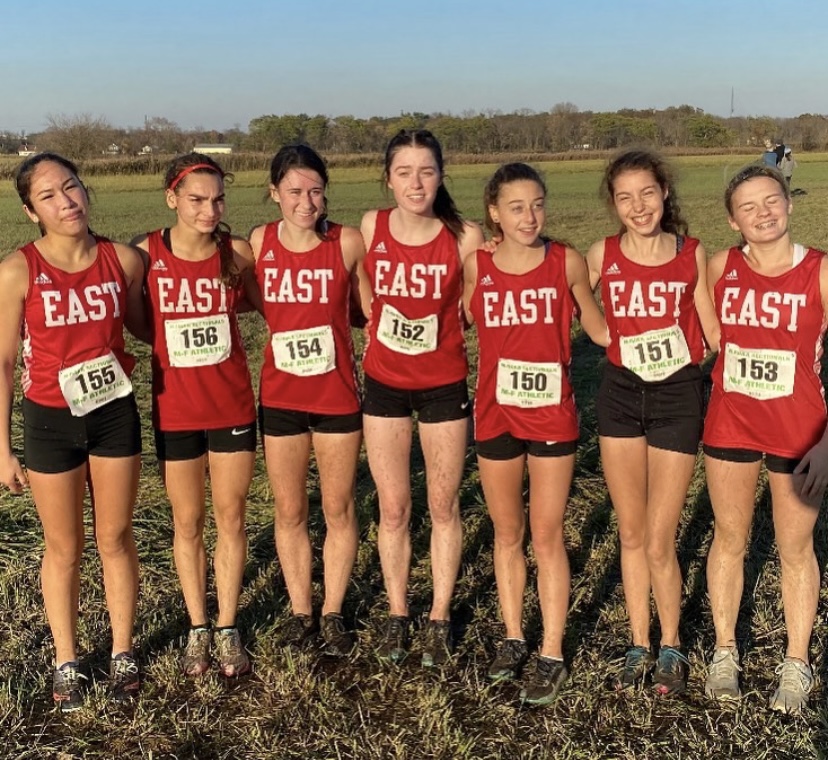 The girls cross country worked very hard and made the best of their season.

Through a pandemic that has forced thousands to disconnect from their jobs and true-blue passions− Cherry Hill East Girls Cross Country has found a way to continue running, grow stronger, and spark a sisterhood-ignited flame that revolves around their commitment to persevere and work harder.

Although most of the team improved previous times from last year or the beginning of the season at the Cougar Invitational, they found lots of success leading to the Group IV Sectionals because the Girl’s Cross Country Team ran most of their meets at Dream Park. Leading the team’s charge to finish second at the Group IV Sectional Race, the team’s best finish since 2006, Lexi Tepper (‘23) became the Group IV sectional champion. Following in 5th place, Marykate McCurdy (‘21), in 12th, Madison McNiff (‘22), Inesa Grace Linker (‘23) came in 13th, and Sabrina Rounds (‘21) came in 30th.

“The connection that running gives us is truly special as running is completely a mental sport, and because of that, a runner always needs constant support [system] like [being able to] rely on her teammates to push her to the finish line,” said McCurdy.

The team learned to celebrate their little successes and accomplishments as individuals− completing three sets of a workout or getting a PR at a specific course turned little victories into stronger motivational bonds. However, many of the runners felt that the team’s lowest point was not winning the Conference and following after the pursuit of East’s victory during the previous two seasons.

McNiff says another one of the rock-bottom positions of the season was the Camden County Championships because the team did not do the best, subsequently putting themselves down because of it. The low hanging heads forced the girls to dig themselves out of a hole that they kept putting themselves in and change the outlook from a little bump in order to overcome it.

Due to the coronavirus pandemic, uncertainty and low motivation were at an unfortunate peak but the girls persevered and learned to band together. “I think that the summer was disappointing because we were always wondering if we were even going to have a season. However, we have so many positive influences on the team that helped us train harder, knowing that our work would put us on top if we did have some sort of a season” said Tepper.

Usually, during the season the cross country runners are used to running together in packs, but due to forlorn external forces, the runners had to social distance, taking away some of the best conversations and memories that stem from running together and team bonding. Additionally, practices differed from other years because of mask mandates, running “pod,” new and ever-changing information, and required health checks.

Tepper said, “Our ability to understand that, while we were practicing, other teams were still disheartened and not training as hard as they would during a “normal” season, [helped] us push ourselves past the odds… I think we were lucky to have races with everything going on, and by the end of the season, we were able to come together as a team to prove ourselves.”

Girl’s Cross Country has a bright future ahead at East because of the sisterhood and running relationships that continually get passed down from class to class. The program has exponentially grown over the preceding few years. “Watching the girl JV members of the team is very inspiring. At practice, they always put in their best effort and put themselves in the fastest groups” said Rounds.

The team’s sense of family will help them move forward in the future as it is key to performance, strategizing, and working together. Although many say running is an individual sport, it is also very much of a team sport. Leading the team to triumph, Coach Maniscalco and Coach Brake make the transition for new runners seamless as they help runners reach their full running potential and kindle motivation by displaying expert tips.

“Cross Country has been affected by [the global pandemic] in many different ways, especially, the team aspect. There were no pasta parties, which was a great way to get to know your team better. Another was [the lack of and the absence of] underclassmen… because there was no communication without being in school” said McNiff.

Overall, the Girls Cross Country team has found success by safely coming together despite the many difficulties of holding a season during a global pandemic.