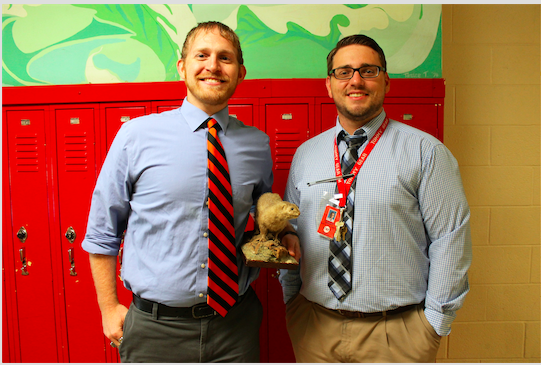 The freshman class will be advised by Mr. Jason DeFuria and Mr. Nicholas Wright. President and Vice Presidents for the class of 2020 will be elected by the end of September and representatives will be elected in October.

DeFuria has been the advisor of a class before, but solely at the school he formerly taught in Northfield, Massachusetts. This is the first time that Wright will be advising a class.

The opportunity to get to know students outside of a classroom setting attracted DeFuria and Wright to being a class advisor. Both also believe that students should get involved with extracurricular activities.

You will often hear Mr. Davis talk the fact that there’s two school days. There’s a lot of kids who will come here for the first school day, which is 7:30 to 2:30, but that second school day of actually getting involved and finding out who you are as a person is one of those experiences I want to provide for students,” said DeFuria.

By encouraging students to get involved past the conventional school day, DeFuria and Wright hope to have representation from all over East.

“We kind of want greater participation from everywhere in the school. Like, we want to make sure that every corner of the school is represented,” said Wright.

DeFuria and Wright hope students will gain real world skills through their involvement with SGA, primarily leadership. They hope that these skills learned will help students later in life, when they go to college and get jobs.

The advisors plan to get the freshman class involved with community service and take an active role in caring for their community.

Both advisors are taking a hands off approach and waiting for students to be elected into SGA before they start making plans for the class. The advisors want to empower the Class of 2020 to plan memorable events.

“This isn’t our class, we’ve been to high school. This is their time, so we want…to empower them to plan events that they would want to go, that they would enjoy, and that they’ll remember for a lifetime,” said DeFuria.