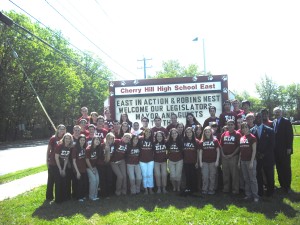 On Friday, April 30, the East in Action Club (EIA) held its Third Annual Legislative Breakfast in the Cherry Hill East library.  Each year, EIA chooses a cause to focus on during the event.  This year, EIA partnered with Robin’s Nest, a non-profit organization dedicated to improving children’s well-being in a family setting, with the goal of raising awareness among the attendees, and ultimately the community, about foster care.

According to club founder and president Shayna Golkow (’10), EIA has been planning for the breakfast since January and raising money since December through bake sales.  Golkow said that the club formed four committees to plan for the event.  The preparation committee was in charge of making posters and the program, led by David Jacob (’13), and the guest committee took on the job of creating the invitation letter and greeting the guests on the day of the event.  Preparations also involved a food committee, in charge of working with Aramark to purchase refreshments, and a student presentation committee, mainly headed by Jackie Susuni (’12).

Around 46 club members met the club’s criteria to attend the breakfast, joined by over 30 community member attendees, including school administrators and faculty, legislators, officials and school board members.  For the majority of the event, club members presented personal stories and information about foster care within the community.

“I think people were really affected,” Golkow said.  She added that several school board members and legislators approached her, informing her of their interests in taking action.

Golkow said that overall, the breakfast posed a great opportunity for non-officer EIA members to get involved and inspired for next year.   As a senior, Golkow is wrapping up the year and sadly saying her goodbyes to the club.  She had revived East in Action just three years ago as a sophomore, taking the club to a community-wide level when she launched the First Annual Legislative Breakfast.  Now, over one hundred students participate in EIA and look forward to the upcoming officer elections.

For any students interested in joined EIA for the 2010-2011 school year, listen for announcements and flyers for future meetings