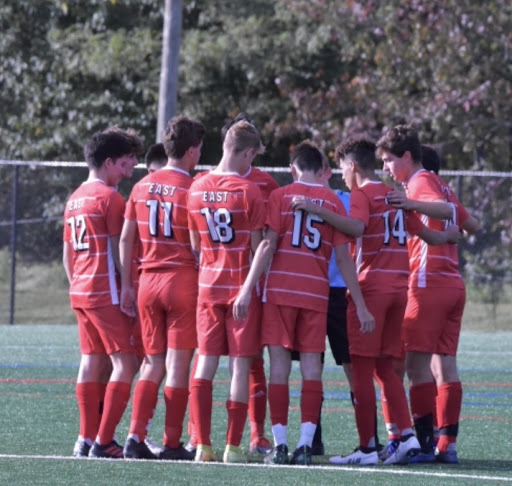 East Soccer team huddle together in a circle

The Cougars defeated visiting Washington Township by a score of 2-1 on Friday, October 2nd at Decou Fields in Cherry Hill. In a game that saw several opportunities, it was Luke Luehrs (‘21) who came through for East, scoring both of the Cougars’ goals.

The first half began with lots of back and forth play. Sophomore duo Jakub Semelko and Adam Blumenthal dictated the play in the midfield, while outside backs Rei O’brien (‘21) and Trey Shaw (‘23) were able to cover the flanks for the entire period.

Four free kicks by East all were completed without a goal, and the plays each left lots to desire. Goalkeeper Matt Mueller (‘21) came up big with two key saves early on, but the counter attacking playstyle of both teams would lead to many turnovers.

Later, two chances went wide as Blumenthal was unable to connect properly from the top of the 18-yard box, but the pressure would resume later in the game. Finally, with three minutes remaining in the half, a Washington Township free kick saw a wide open striker connect with a header that soared over Mueller’s outstretched arms. This goal gave the Minutemen a much-needed momentum boost headed into halftime.

The second half was a whole different narrative. While five minutes went by with no real pressure, a few changes led to a wave of pressure by the Cougars. A crafty slide tackle from Drew Luehrs (‘21) and a through ball from Shaw almost saw the first Cougar goal of the season, but the pass got mixed up in the middle.

The true breakthroughs came when Semelko and Luehrs began to connect on passes in the Minutemen’s half. A pass inside saw a shot from Luke Luehrs barely miss, but a minute later, Luke Luehrs was able to draw a foul inside the 18-yard box, leading to a game-changing penalty opportunity.

Luehrs converted the penalty, tying the game at 1 a piece with 20 minutes remaining. After a slight injury, Luke Luehrs checked back in and started right where he left off. A headed pass from Tobey Maidenberg (‘21) to Blumenthal started a quick break. Blumenthal then found a streaking Luke Luehrs down the middle of the field, creating a one-on-one opportunity that trickled into the net from Luke, giving East a demanding 2-1 lead.

With a few minutes of brilliant play from Alec Herring (‘23) and Hank Feudtner (‘21) late in the game, the Cougars were able to hold off any pressure from Township.

“It was a complete team effort,” Luke Luehrs said after the game. “Every guy played a part in this win.”

The Cougars start the season off in great fashion, giving them a solid win in an Olympic Conference where no game will be easy. East faces Shawnee in Medford on Tuesday, October 6th.

Coach Melograna and his boys are hoping to make a deep playoff run this year, and a win like this only confirms that they will be a force this season.