Cymbals Eat Guitars on their new album, the state of New Jersey and fleas

Cymbals Eat Guitars are in Headgear studios in Brooklyn recording their sophomore album, but it appears they have hit a major roadblock: “Incubus has a new record coming soon. John, better delete all those DJ scratch tracks. Looks like it’s back to the drawing board. :(”

That comes from the band’s Facebook page, a raging source of inside information about the recording of the album and oddball repartee between the band members and producer John Agnello. In the past few weeks, the band has posted a video of their recording the sound of a finger dragging across the lip of a glass, a recurring feature they call “misheard lyric of the day” – “it’s a fictitious wish to be baking bread” is a highlight – and their escapades with the digital Scrabble game Words With Friends – “If only ‘fweb’ was a word.”

But even after all this lollygagging, the record is finally finished and will be released on Barsuk records later this year, a Seattle based record label to which Cymbals signed to earlier this year.

“We couldn’t be happier,” wrote the band’s bassist and Ewan McGregor doppelganger Matthew Whipple in an email interview in April. “The idea of being on a West Coast label was attractive to us as well, just to broaden our horizons a little.”

The band’s last album, Why There Are Mountains, was released modestly on Sister’s Den Records in 2009. It was welcomed into the indie-sphere with universal acclaim and earned Cymbals Eat Guitars spots on Pitchfork’s year-end list and opening for underground legends the Dismemberment Plan.

“We’re kind of secretly a Jersey band,” said Whipple. “We’re slowly beginning to reveal that to the world.”

The musicians hail from all over the state – hometowns include Manahawkin, Staten Island and Moorestown.

Cymbals Eat Guitars seem to cherry-pick some of the best elements from indie rock’s golden age and pepper them over their own greenhorn song writing, which is great in its own right.

“There’s definitely a canon of favorite sounds of ours,” said Whipple in a phone interview late last year.

“Most heavy, swelling guitar music is some of our favorite stuff,” adds front man Joe D’Agostino.

But, according to Whipple, the still-untitled LP2 will not be a carbon copy of Mountains.

“I feel like the whole time making this record has been an experiment. Joe basically wrote the entire first record himself, and this time around it was the four of us making a record together. Joe still wrote most of the song skeletons, save for two where I wrote the music and he wrote the lyrics, but as far as the final sound goes we all had pretty equal input,” said Whipple of the album’s songwriting structure. “There are some noisy bits, but the first record had that too. The noisy parts are different on this one though. It’s a little weirder overall, but I think it’s also got some of the most pop stuff we’ve done yet.” 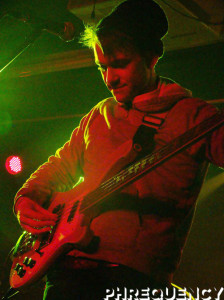 Matthew Whipple adds some fuzzy low-end to the mix at the Ballroom. Courtesy of phrequency.com John Agnello worked behind the boards on the new album.

“John is definitely a character.  He’s also an amazing producer and fiercely loyal buddy,” said Whipple, “He’s been amazing at getting us to operate outside our comfort zones in subtle ways and he’s directed the workflow really well. He also helped us tighten some song arrangements over the course of a few rehearsals before recording.”

Agnello has produced for greats like Sonic Youth, Dinosaur Jr. and the Hold Steady.

Joseph D’Agostino spearheads Cymbals Eat Guitars. Onstage, he ferociously mangles the roars and squalls of distortion coming from his Jazzmaster with unsettling charisma and passion. His vocals fall somewhere in between Isaac Brock’s yelp-ier moments and Stephen Malkmus’s least apathetic ones. Also: he sweats a lot.

Since D’Agostino is the band’s sole guitarist, it’s up to keyboard player Brian Hamilton and bassist Matt Whipple to flesh out the mix. When they played the Starlight Ballroom in January, the front of stage was lined with a jungle of effects pedals, many of which were built by Hamilton himself, who runs a Philadelphia based effects company called smallsound/bigsound.

Cymbals Eat Guitars have played shows with The Thermals, Bear in Heaven and Surfer Blood. Although Whipple says the band’s weirdest fans reside online, (“There’s some real weirdos on our Facebook page. But we love them”), they have had a few unusual experiences on tour. A “drunken housewife” gave the bassist an impromptu haircut at the merchandise table after a show in Salt Lake City. One time, the musicians discovered that the Red Roof Inn that they had checked into was full of fleas, but they were so tired that they knowingly went to sleep in flea-ridden beds.

“We were literally sitting in the beds, with the bugs jumping around, Googling how to identify fleas,” recalls Whipple.

The band has tentative plans for a tour this fall. Resident ivory-tickler Brian Hamilton lives in Philadelphia now, which means the tour will almost definitely include a stop in the City of Brotherly Love. At the show: enjoy the new material, try to avoid “the splash zone,” (the area of the first row right in front of D’Agostano) and try not to fall in love with this band. It’s difficult.