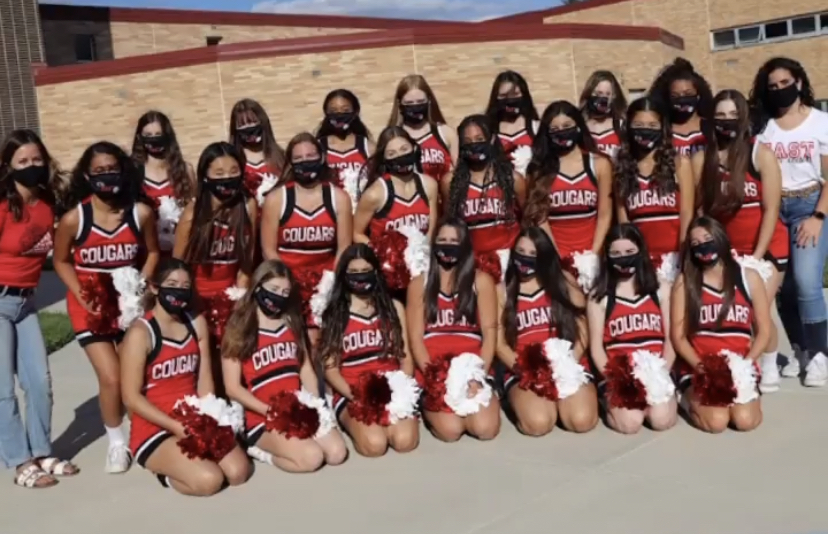 Despite all the COVID-19 regulations, the East Varsity Cheer team made the best of their short season.

East’s cheerleading team made the most of a difficult situation this football season. With a lack of fans, COVID-19 precautions in place and a confusing football schedule, these girls had to come together and persevere like every other team. Cheerleading is much more than meets the eye- it takes the innate ability to stunt, the enthusiasm to yell for four quarters and the ability to unite over a dozen girls into one voice.

“We could not stunt for a while,” said senior captain Joy Thomas. “A new struggle I faced was keeping everyone motivated.”

These words were echoed by fellow captain Aubrey Bohem (‘21).

“It was an important season for me as a senior captain because I got to help lead and guide my team through the season,” Bohem said.

But the navigation of the pandemic had some silver linings hidden. The need for creative alternatives to practices led to closer bonds between the girls that previous seasons prevented.

“We tried to create a sense of normalcy by having outdoor and virtual workouts,” said senior Maddie Graham. She also said that they had outdoor fundraisers that brought the team together to raise money.

Cougar pride flows through each of these girls, and it shows year in and year out. Even during a year where they cheered for minimal to no fans, the girls brought the same spirit that they would before thousands of spectators.

“No matter what grade you’re in we all connect with each other and bond,” said Thomas when asked about how special this team is. “We all work really hard and encourage each other to reach our full potential which makes it fun and feel supportive.”

This work ethic sets a precedent that will be followed by the succeeding cheer teams.

“There are a lot of experienced cheerleaders coming to East next year,” said junior captain Alexa Atlas. “Not only that, but it will be our coach Amanda Farrel’s third year leading the team. She is very determined to make the team the best it can be and always pushes us to try our best.”

“This team gained so much skill in such a short time and had such an amazing outlook throughout. Their compassion and drive never ceased to amaze me,” she said.

So in a fall sports season that saw each and every team find special ways to maneuver within the pandemic, the cheer squad at East was no different. These girls came together and learned from one another while cheering on East’s football team this unique season.

The East cheerleading team is in a good position to continue their excellence in the upcoming years, and this season was an example of how enthusiasm can breed greatness.