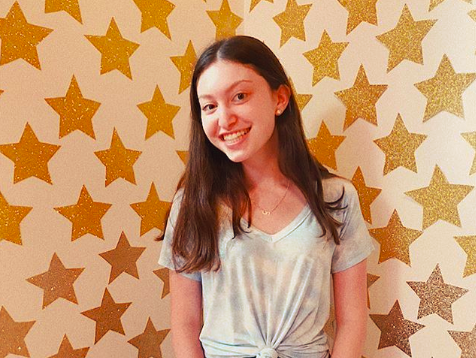 If I am being completely honest, my only motivation for choosing to keep a laughter journal for twenty days was because it sounded easy.

The plan was that, for twenty days, I would carry around a small reporter’s notebook and jot down every time that I laughed– whether it was one of those little snorts one might make when hearing something vaguely humorous to that full-body, tears-streaming-down-your-face burst of laughter.

I started every day armed with my red notebook open and pen at the ready, prepared to scribble. But what I found was that I laughed a lot during inopportune times. You cannot exactly whip out a reporter’s notebook while, say, playing pickleball in gym class or while your teacher is passing out a test on the Roaring Twenties or while you are jogging down the C-wing stairs on the way to English class.

Many times, I would make a mental note to myself that I had laughed, to scrawl it into my journal at a more convenient moment. However, the sad thing about being a student, with so much floating through my head at any given second during the day, is that my mental notes often vanish without actually existing somewhere on paper.

In total, I completed 12 full days of the challenge. There was a five-day window– which, looking back, was a week when I had several tests to study for, essays to write and projects to complete– left completely blank in the journal, and three days at the end. Though it is embarrassing to admit that I did not successfully complete twenty days of a simple laughter journal, I do feel as though I learned a bit about myself as I flip back through the notebook.

Though I have never really thought of myself as an early bird, I noticed that considerably more of my laughs were written down during my morning classes. While it is possible that I maybe did just laugh more in these classes, I believe that what differs from the afternoon is that I was more energized, and thereby more motivated, to make the effort and use my journal in the mornings.

There were quite a few instances in the notebook when one bullet point would denote something that had made me laugh, and the next line down would read, “^^ laughed while writing that,” proving that some jokes just get better with age.

Immediately after choosing the laughter journal challenge, I was eager to explore the results that this little notebook could produce. What I found, rather, was less insight into what truly makes me laugh and more of an understanding that I really hated being forced to write down every time I so much as giggled. I think of myself as a fairly bright, cheerful person, and I love the feeling of laughing so hard that tears well up in the corners of my eyes. But over the course of this challenge, I came to see my laughter as a burden, knowing that every time I enjoyed that small moment of glee, I would have to write it down. It made laughing feel like a chore when it should be a hobby.

I do wish that I could have discovered a bit more of the interesting results of the laughter journal; I was genuinely curious to figure out what insight this challenge could provide into my life. But I did discover one thing: a life lesson. Sometimes it is not the best move to impulsively do something just because it sounds easy– and I have a small red notebook full of scribbles to prove it.