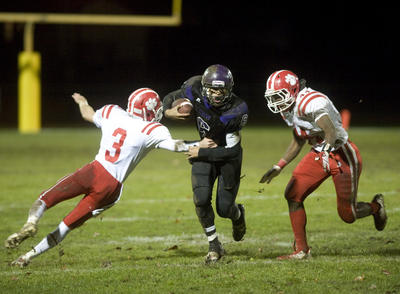 The Cougars football team failed to bring home the boot for a second year in a row. East lost to the Cherry Hill West Lions at the traditional Thanksgiving rivalry matchup. Despite severe rain and snowfall, dedicated and spirited East fans came out to support the team.

Cherry Hill East student Renee Powers (’16) said, “I am here to support the football team and watch them win.”

The East vs. West Thanksgiving game brings together current students, alumni and fans who are dedicated to taking part in this tradition regardless of weather conditions that could deter the casual football enthusiast.

“My son used to play football for East and that’s why I am here,” said Jim Schreiber, a bundled up East fan.

The Cougars came out strong at the start of the game, winning the coin toss and gaining yards up the field as they slipped and slid across the muddy Cherry Hill West stadium field. The Cougars offense did a great job throughout the first quarter, gaining yards up the field and preventing West from accumulating significant yardage. Unable to get the ball past the fifty-yard line, the two teams reached a stalemate and ended the first half with a score of 0-0. The first half highlighted the weather as a key factor in shaping this game.

At the start of the second half, the Lions started off with the ball, but soon relinquished it when the Cougars caused a fumble and took possession. At the fifty yard line, quarterback Brandon Stern (’15) handed the ball off to running back Miles McLeod (’17) for a gain of thirty yards, the longest of the game. However, this forward drive abruptly ended with a disappointing fumble in West’s red zone. The third quarter ended with a score of 0-0.

With six minutes and sixteen seconds remaining in the game, West’s Tyrone Williams scored a one-yard touchdown on the Cougar defense. The Lions then completed a two-point conversion making the score 8-0.

The Cougars failed to score in the six minutes remaining, leading to Cherry Hill West winning the annual rivalry for the second consecutive year.

On the other hand, East still leads the Thanksgiving rivalry series with a record of 31-15. So, the Lions may have won the 2014 game, but they still have years of catching up to do.