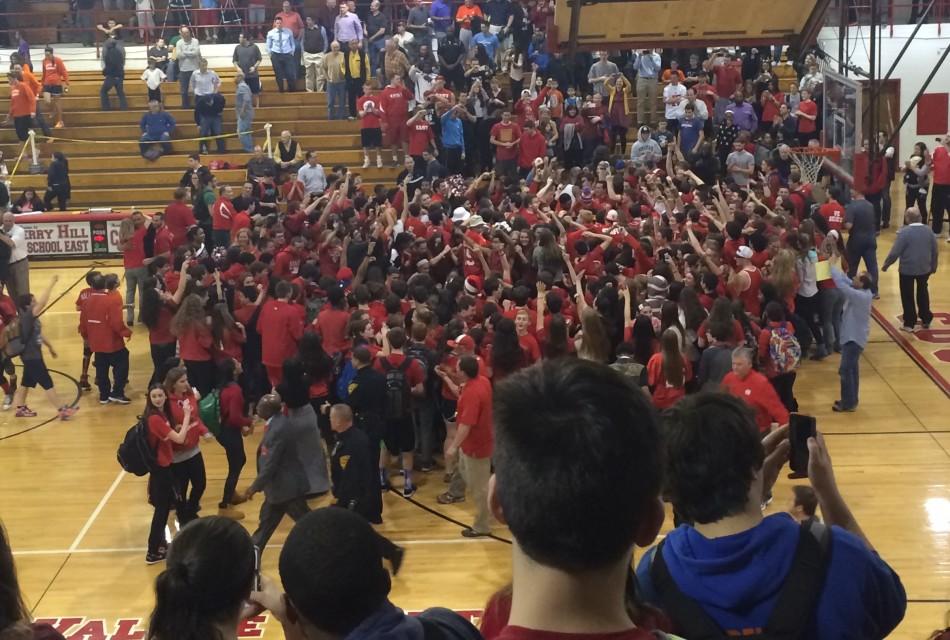 The Cougars Varsity basketball team won their first sectional championship in the history of Cherry Hill East with a 52-41 rout of the Cherokee Chiefs. Despite missing nearly half of the senior class, East’s fan section affectionately named “The Countrymen” generated a massive attendance which dwarfed Cherokee’s puny fan section and provided the motivation the Cougars needed to pull out the win.

When asked about the keys to winning the game, star point guard Jake Silpe (’15) said “[Cherokee] does a lot of driving kick offense. Everyone on the team can shoot three and span the floor. That’ll be a challenge for us, but I think we have what it takes to win.” Silpe managed the entirety of the game, putting up an overwhelming 23 points, 6 assists, and 7 rebounds, with 2 steals to boot.

After back-and-forth play throughout the first quarter, East held a 14-10 lead, but because of scrappy Cherokee defense, they only scored 2 points in the second. The score was 18-16 Cherokee at halftime.

As the third quarter commenced, the Chiefs appeared to be carrying the same momentum they had in the second quarter, as they took a 22-17 lead over the Cougars. However, the East team did not lose confidence, and after the teams exchanged fouls, Silpe hit a huge three-pointer to give East a 28-24 lead. After the third, East led 30-24.

The Cougars ran away with the game in the fourth quarter with help from two monumental threes from Austin Wetzler (’14) and Phil Cuhna (’14) and perfect 14-for-14 foul shooting from Silpe. East’s defense was dominant all game as was obvious from Cherokee’s meager 6-point third quarter. Cherokee wasn’t just missing shots; the team could not even get shots off before many of their possessions ended. The Countrymen stormed the court as time expired.