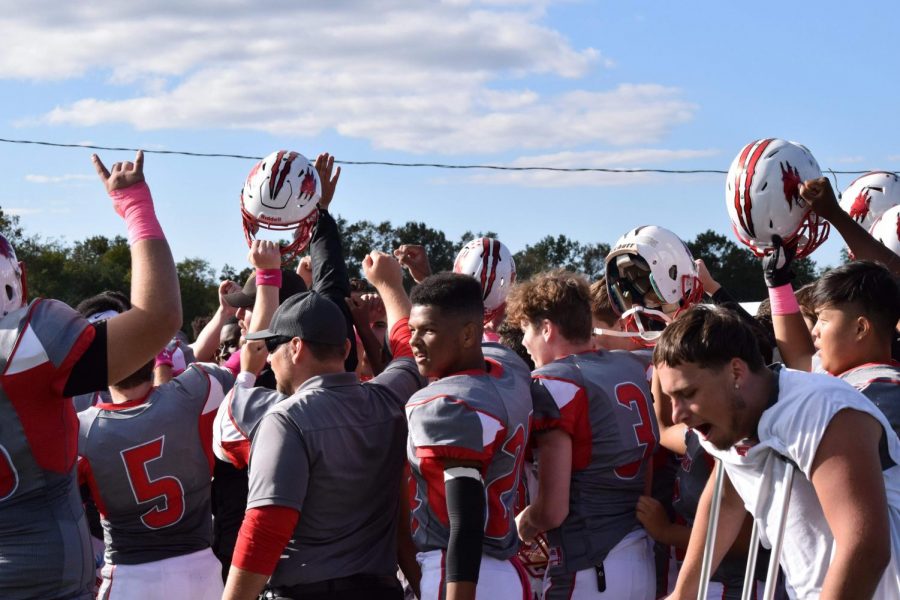 The East Cougars celebrate their first win of the season, after an exciting game.

48-0The East Cougars were firing on all cylinders Saturday as they took down the Princeton Tigers.

East dominated at the line of scrimmage throughout the game.  They scored six rushing touchdowns on Princeton, who currently has a record of 0-4.

Running back Mike Wheeler (‘20) got the Cougars off to an early lead as he took a handoff and pounded his way for a one-yard touchdown around one minute into the game. Wheeler would finish the game with two touchdowns and over 50 yards on the ground.

The Cougars’ defense was impressive in a shutout performance, anchored by Khalil Harden (‘22), Jadon Louis (‘21), Wheeler and Danny Yasenchak (‘21). East forced three turnovers from the Princeton Tigers quarterback, Judd Petrone, with interceptions by a trio of juniors – Yasenchak, Justin Becker (‘21) and Tyler Burke (‘21).

Later in the first quarter, running back Nick Brown (‘21) took a handoff over fifteen yards up the middle for East’s second touchdown of the game. The Princeton Tigers were penalized many times, further helping the Cougars dominate this game.

The next East drive, Shane Trainor (‘20) took a jet sweep over twenty yards into the endzone, making the score 19-0. They Cougars got the ball back quickly with a turnover. Early in the second quarter, Quarterback Seba Miller (‘21), threw a lofty pass to wide receiver Will Mcfadden (‘20) for a 22-yard touchdown.

East headed into halftime with a 41-0 lead, after Mike Wheeler (‘20) and Will Mcfadden (‘20) scored two more crafty rushing touchdowns.

In the second half, running back, Alex Tanaka (‘23), scored the final touchdown, taking a rush 8 yards to seal a convincing win by the Cougars.

In the breast cancer awareness game, where both the crowd and players donned pink to raise awareness for the disease, the large crowd cheered loudly to show support for the Cougars.

Cougars coach Mr. Andrew Daly was heartened by the win.

“It’s the first brick of the foundation that we are trying to play for the rest of the season,” he said.

The Cougars will travel to Cumberland on October 11 in a big game, but for now, they can savor this commanding win.