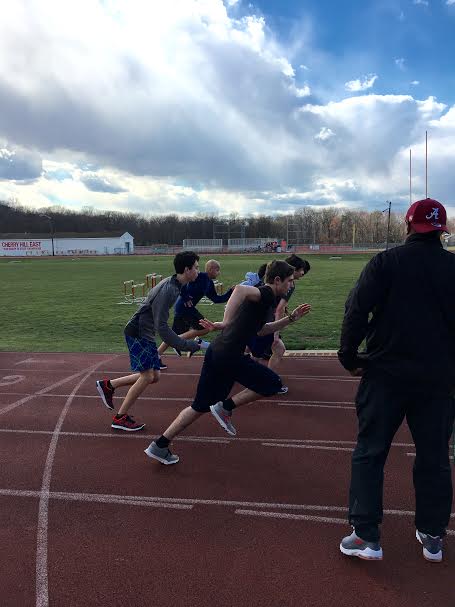 East track team starts the season on the right foot.

The Eastside team set out to interview each head coach to get an inside look into the pre-season of spring sports.

As the school year moves in to its final months, spring athletes shake the dust off their gear and get ready to make a mark on the 2016 spring season. In the weeks leading up to the official start of the spring season, coaches have the time to build, condition and strengthen the teams.

Every season has its ups and downs, its successes and failures, but in the end it is the work and relationships made that truly make a team.

As pre-season winds down, East Baseball strikes out their obstacles and slides in to the official start of the season with confidence and tenacity. Coach Radbill hopes to use this season to better develop the baseball program at East.

After a successful 2015 season, East Boys Tennis looks to improve and serve up a Group IV title.

Our goal is to be competitive in the olympic conference, hopefully win the division and to go as far as we possibly can in the state playoffs”

East boys Track and Field looks to jump to the top and sprint past their opponents to win another conference title. Coach Maniscalco is optimistic about the seasons potential and has high hopes for the outcome of 2016.

Our goal is to keep up the tradition we’ve started…we’ve really had a winning tradition here and we’re trying to win the conference again, which would be the fourth time in the past five years.”

East Girls Track and Field plans to hurdle over their opponents and improve off of last years finish.

After a successful 2015 spring season, East Boys Volleyball has plans to hit hard and reach playoffs again. Coach Zaun has high expectations for the team and hopes they can spike out their rivals and move their way to the top.

East Softball gets the season together in full swing and looks to establish themselves in South Jersey.

East Girls Lacrosse looks to improve from last year’s 7-13 record and make a run at playoffs.

East Boys Lacrosse scoops up a new coach, Coach Peruso, who has plans to build a foundation for the program and make their way to playoffs.