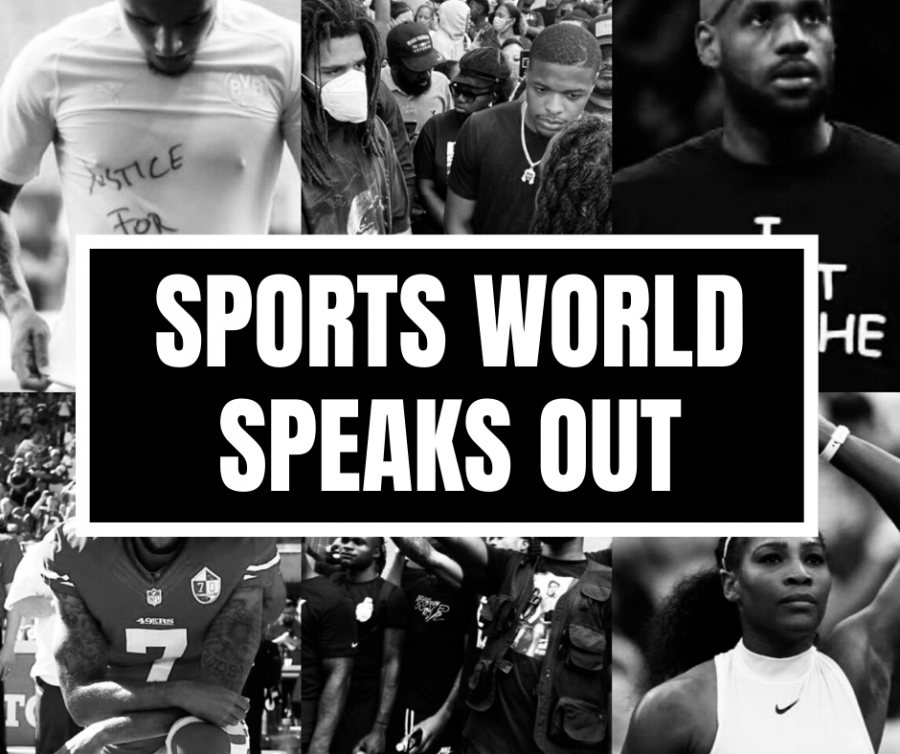 Athletes in the sports world speak out.

We live in a world where success is measured by the number of zeros in one’s bank account and by the accolades one has acquired. A world in which the line between poverty and affluence is so steep that to close it would take a millennium to close the gap. A world that is often portrayed as cold as night and as depressing as the abyss in the media.

This is why we need sports. Sports are a form of expression that provide an escape from life’s turmoils. Sports enchant fans into this world of miraculous art. And athletes are the artists. Lebron James is Picasso, Tom Brady is Van Gogh, Michael Phelps is Rembrandt, Serena Williams is Frida Kahlo.

Yet there are many times when leagues take the backseat to issues beyond the sporting world. World wars, diseases and social disagreements have led to pauses in athletics in the past, but this event during the pandemic has sparked outrage from athletes, coaches, teams and fans alike.

American author Seth Godin once wrote that “artists are a people with a genius for finding a new answer,” and athletes created a new bond with society in a way only true artists could. These artists allow a brief moment in time where the world can fade into the background and a rush of emotion can crawl up a fan’s spine and explode into a chorus of shattering yells throughout a stadium. That’s art.

So in this world of wars, oppression, racism, poverty, climate change and straight indifference, sports are the art that we all desperately need. And that is why athletes hold more power than one can imagine at their very fingertips.

Influential athletes and organization members have made many attempts over the years to try and correct systematic oppression, but this event feels different. There is more emotion, more people and more outrage than any prior responses to injustice have seen.

San Antonio Spurs head coach Gregg Popovich said “we’ve seen it all before, but nothing changes. That’s why these protests have been so explosive.”

At the forefront of many of these protests were sports stars, megaphones in hand. Many also took a stand at home, attempting to provide an influence as the COVID-19 pandemic has halted most of the country. Athletes have always spoken out and will continue to make the difference they wish to see in the world, but their cries are falling on the ears of a scared and terrified community during this time. Athletes are trying to make the stand that they should, but is it enough? The question is complex, though valid.

As riots ensued, athletes and former pros like Jaylen Brown, Stephen Jackson, Dennis Smith Jr., Russell Westbrook, Leonard Fournette, Kyle Lowry and Malcom Brogdon, along with countless others, were seen marching the streets like Isiah Thomas, Kareem Abdul-Jabbar and Muhammad Ali once did. The same passion that the greatest athletes of all time devote to justice was seen as the sporting world took a stand. Soccer stars like English player Jadon Sancho and American player Weston Mckinnie wore honorary bands and shirts in Germany to commemorate George Floyd. Twitter was ablaze in protests of anger toward the entire situation from pro athletes everywhere. Even Michael Jordan, a notoriously neutral citizen, spoke a few words defending George Floyd’s legacy.

Jordan said “I can no longer stay silent,” while also pledging that his brand will donate $100 million to different African American causes over the next 10 years.

“I Can’t Breathe” is a remark that attempts to encapsulate the utter disgrace we call racism in this country. It is a phrase packed with both emotion and anger, fear and distrust, sadness and hostility. As George Floyd suffered through his final breath, the sporting world came together and spoke as one voice, a voice that overshadows even that of the president during these troubling times.

When Lebron James, Chris Paul, Carmelo Anthony and Dwyane Wade stood up in front of a quiet 2016 ESPY crowd, they stood for what could be, yet as Timberwolves coach Ryan Saunders put it, “I don’t take lightly to the fact that I have not experienced some of these things that our individual guys have had to experience.” The onslaught of injustice has continued and will continue unless influential individuals, no matter their race, can come together to make the difference we need.

That is why the ashes of George Floyd formed a fiery alignment that has not been possible over the years. Race is only a factor in this movement, because many athletes and stars are coming together, no matter the color of their skin, but by their own morals.

NFL commissioner Roger Goodell responded to a viral video in which NFL stars spoke out to form a united front against the injustices. Goodell said “the NFL and our players are at our best when we help create a sense of unity in our country and our culture.” Though this statement took lots of media and inside pressure to be proclaimed, it is a big step forward for the league and sports in general.

MLB players created a similar video, as did many NHL players in a predominantly white league. African American hockey players Evander Kane of the San Jose Sharks, and P.K. Subban of the New Jersey Devils have been large voices in the NHL’s fight against injustice. Kane said “we need so many more athletes that don’t look like me speaking out about this…” in an interview with ESPN First Take co-host Max Kellerman.

So as the looting halted and protests became peaceful, NHL, NBA and MLB (maybe) seasons on the horizon are all that we can look forward to. And justice. Justice for the hundreds of lives taken wrongfully. Justice for those being shut up when they want to practice the freedom of speech this country was founded upon. Justice for the cardinal virtues that Americans adhere to as common principles, but are often forgotten in times of disagreement.

Sports have played a major role in shaping American culture and will play an even bigger role in shaping what we hope is a united society in the future. So to athletes everywhere, your voice unites people into the team we call the U.S.A, and you must lead by example.

Sports are more than a game. They are an art.

And athletes are the artists that can paint a glorious future.