Sophomores dominate on the court for the Cougars 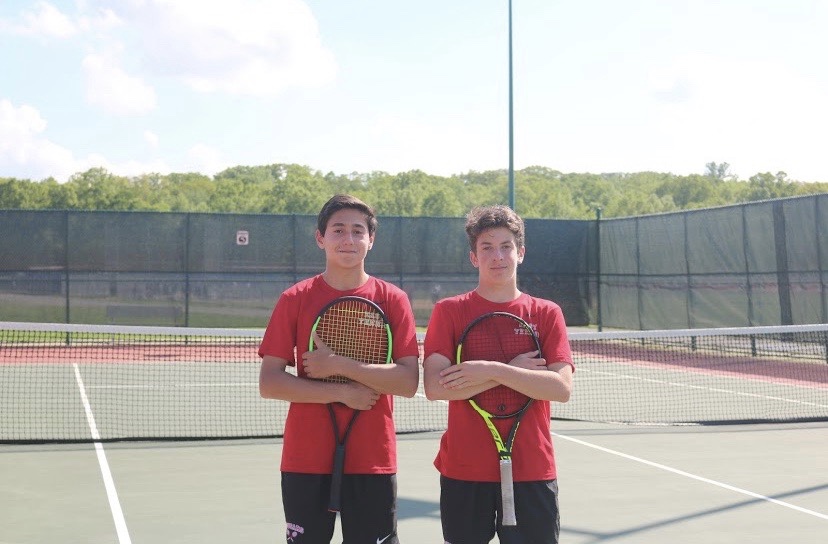 Two best friends, growing up playing tennis together, making varsity during freshman year and helping win the first sectional championship in years sounds more like a movie than real life. But for Nathan Belitsky (‘22) and Brett Schuster (‘22), that is exactly what happened.

They both grew up playing tennis — in both cases, their parents wanted them to play. Belitsky started playing around age eleven, while Schuster started around age six. They have also been friends since they were young and, a couple years ago, started participating in clinics together at the Cherry Hill Racquet Club.

Even with that under their belt, trying out for high school tennis was a whole new ballgame.

“It was more competitive than I thought it was going to be,” said Belitsky. “Everyone was fighting for spots. I wasn’t used to that — in clinics, everyone’s friendly and then when it got to tryouts it was really competitive with everyone fighting for their spot.”

However, both Belitsky and Schuster made it onto the seven-person Boys Tennis Varsity Team. Schuster played singles while Belitsky played doubles with Jeffrey Xi (‘19).

“To have two freshman walk in and have one play singles, one play doubles, I was pleasantly surprised,” said their coach, Gregory deWolf. “I think they had probably one of the most successful freshman tennis years that I can remember in recent times… to have two guys come in, and they’re best friends too, is kinda fun.”

Though getting different positions can be hard on friendships, and playing singles is more coveted than playing doubles, the boys think of themselves less as separate positions and more as the pieces that make up a team.
“We’re a team so once the spots are solidified, we just work together from there and play as one team,” said Schuster.

Similarly, they did not have too hard of a time being the youngest players on the team.

“I didn’t really think about it like we’re freshman, they’re seniors. We’re all one team and we’re all trying to work for the same thing. I didn’t think we were different from anyone else because we were freshmen,” said Belitsky.

Schuster agrees — the upperclassman are “more than just teammates, they’re friends to us.”

Another thing they agree on: sectional championship was their favorite moment of last year.

East Boys’ Tennis won the sectional championship this past year, after having made it to sectional finals four years ago. Belitsky and Xi scored the clinching point needed for East to win against Lenape.

“…and it was great for us to be a part of that,” said Schuster.

Moving forward, both Belitsky and Schuster hope to be mentors for incoming players, the way the upperclassmen were for them. Additionally, even though varsity spots are not guaranteed each year, both hope to play singles for varsity this year.

“We just want to try to continue what they have going, the same energy, and try to be mentors to the freshman and in the years to come,” said Belitsky.