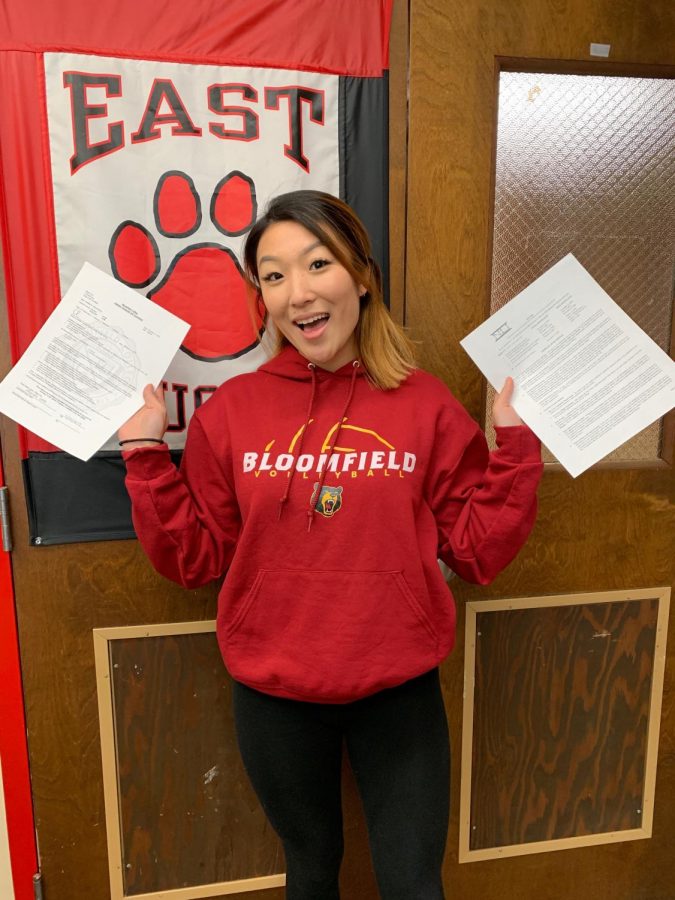 Um celebrates after announcing her commitment.

As the seniors approach the close of their high school journey, the main joy comes in committing to a college.  Sharon Um (‘19) found her dream school, Bloomfield College, and plans to be on their women’s volleyball team.

“When I was 14 and in the eighth grade, I was asked to tryout for Cherry Hill Volleyball Club’s 14U team… I quickly fell in love with the sport,” Um said, now a standout on the East volleyball team.

Um’s schedule is packed will volleyball. Um’s East preseason begins in July, and she practices twice a week with the team. She enjoys playing different types of volleyball: outdoor, indoor, beach and grass.

Um said, “Club season starts one month later in December. Club practices are twice a week for two hours until May. I usually have big tournaments, one or two times a month.”

Committing to Bloomfield, a Division II college, was not Um’s original plan. However, she eventually attended the Kean Volleyball Camp, where she developed a relationship with the Bloomfield coach, James Pompeii. He quickly emailed her after the camp, expressing interest. Coach Pompeii told her that she would receive a scholarship that would mostly cover her tuition, and for Um, it was an offer that she could not resist. Her two other schools that she was mainly considering were Eastern University and the University of Massachusetts, Boston.

She got an offer from UMass Boston and she loved the school, especially the volleyball program that it offered. Nevertheless, she didn’t like how the school was five hours away, and was more comfortable staying in New Jersey.  Um visited Bloomfield after sending the coach film of her playing, and Pompeii laid out the offer instantaneously.

Um plans to study psychology at Bloomfield. Bloomfield offers a wide range of academic opportunities as well as an incredible athletic program.

She said, “I knew my whole life that I was into human behavior and that I am a people person. I really love talking to people and helping people, whether I know them or not.”

Um enjoys every moment of volleyball, and continues to be a positive person. She has developed so many friendships from the sport she loves.

Um said, “I constantly want to get better and I think that it’s so fun and enjoyable just trying to nail passing and setting, even hitting. Since the eighth grade, I’ve been a versatile player and wanted to get better at every position, even though I’m usually the shortest hitter on my team.”

Um is grateful for all the memories she has made at East. Her confidence has changed immensely throughout her high school journey, ad she would like to thank Ms. Walsh, Dr. Covington and all of the people who support her.

Um is excited to continue her education at Bloomfield doing the sport she loves most. Her volleyball journey has made these last four years as a Cougar memorable and something she will never forget.