Seniors edge the juniors at powderpuff 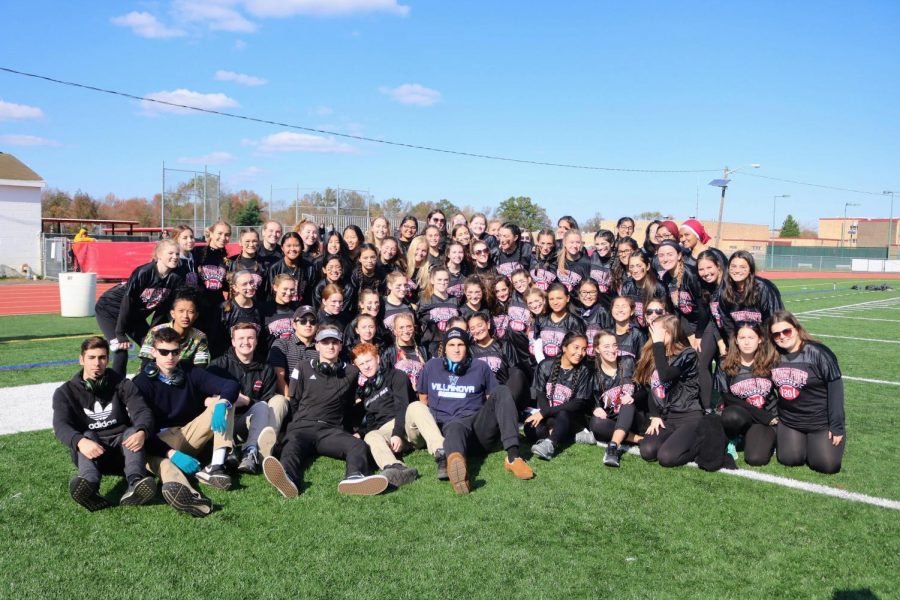 The Junior and Senior girls took on the role of playing in Cherry Hill East’s Powder Puff game, on Sunday November 3, at Cherry Hill East. The seniors came away with the victory, but the juniors didn’t go down without a fight. Each team had their eyes on the prize, resulting in an exceedingly close score of 38-36. The chants from each sideline of students expressed the enjoyment and eagerness that both the juniors and seniors had.

Right off the bat, the teams started strong. Seniors had taken the lead in the first five minutes, with Molly Berlin scoring a touchdown. The seniors scored two more times in the first half. The quarterback for the seniors, Maggie Balderstone, continuously made highlights through most of the game. She was either throwing a touchdown pass, or running the ball, gaining yards for her team. However, the juniors hit them right back with a touchdown, but missed the extra point. But they came back with the help of  many strong players such as Jill Drumm and Ginny Cunninghan, scoring multiple touchdowns for the juniors, keeping the game close.

In the second half, there were many interceptions, touchdowns, and flags from both teams. The seniors and juniors both scored 4 touchdowns, but the juniors missed an extra point. Also, after a fumble from the quarterback of the seniors, the juniors were in possession of the ball, but the time had run out, therefore leaving them without the chance to score a final touchdown to win the game.

The game increasingly got more intense as the scores became closer. Having some of the boys in each grade, coach made everyone in the stands laugh and cheer at their reactions to the plays. Recreating similar actions as a coach for the NFL would do  made the students have a blast. Coaching the juniors team was Ryan Bloom, head of the offensive lineup, Jason Reiter, head of the defensive lineup, Ben Adler, Nick Brown, Tyler Burke, Jordan Segliman, Jeffrey Kaminer, and Danny Yasenchak.

Overall, the score of the game was extremely close, but the seniors pulled out a win. Simon Miller, defensive coordinator of the seniors, said, “It was tighter than we expected, but a win’s a win.”