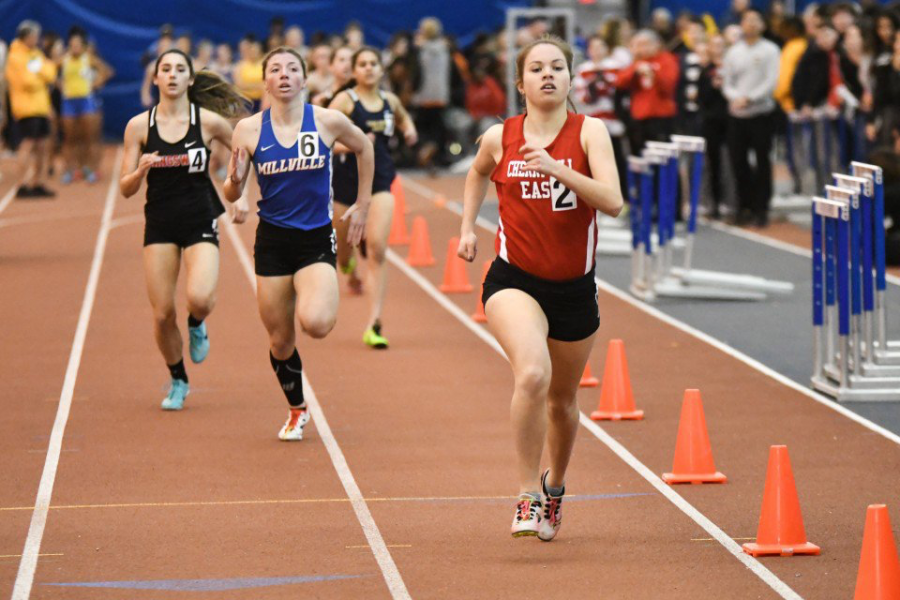 Sarah Pierce (‘19) recently signed to go to Boston College for cross country as well as track and field. Boston College has a Division I running program. Pierce is looking forward to being apart of the team and meeting new teammates. Although Pierce has not been running for a long time, Pierce is a strong athlete who has brought a lot to the Cherry Hill East running teams.

Pierce has a family of runners, including a mom who ran hurdles at East. Pierce’s cousins also run track and cross country in Mainland. She started running track at Beck Middle School for two years, but became more competitive while running in high school.

She trains everyday which usually adds up to 40-50 miles a week. Those miles include races, practices, training intervals, recovery runs and long runs (about nine miles). During the track season she runs the 1600m and 3200m. She also runs the 4x800m medley. In the cross country season, Pierce runs the 5k.

Pierce was not always a runner. Before running, Pierce was a competitive swimmer. She swam on the East swim team and for a club team. Throughout the spring season, Pierce wanted to stay in shape for swim so she decided to sign up for track. Not knowing that this sport would become her passion, Pierce slowly began to fall in love with the sport of running.

“I ended up falling in love with the sport and I became very close with my teammates so I decided to focus on running,” Pierce said.

The next year, her sophomore year of high school, she signed up for cross country, and she is now one of the fastest runners on the team, running a 5:09 mile and a 18:05 5k.

When she is not running, Pierce is planning on connecting with an organization called Girls on the Run. It is a Non-profit organization made to help girls from third to eighth grade develop friendships and life skills that will last a lifetime through running. Having a sport that gave her so many friends, Pierce is looking forward to pass her experience down to younger girls.

Pierce is excited to see what is in store for her future in running. Although she is a little nervous about going to college, she is excited to be running in both the track and cross country meets.

“I’m excited to meet my teammates, to challenge myself and to explore new running areas,” said Pierce.