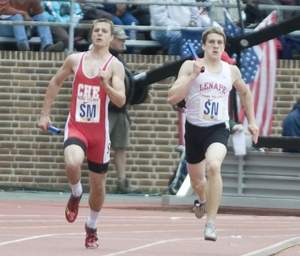 Over the past few years, the Cherry Hill East boys’ track team has quietly built itself into a state powerhouse. Breaking records and earning state championships along the way, the team’s 4×4 relay team has earned national rankings.  Amidst all of the excitement and accolades stands one enthusiastic and talented runner: Alex Reber (‘12).

Running Varsity Track since his freshman year, Reber first started his illustrious career in sixth grade as he starred for the Beck Middle School spring track team. With great length and speed, Reber has catapulted himself and his talents to the top of the New Jersey track world. None of his success could have been possible without hard work though.

“[Reber’s] results are directly related to his endless preparation and work. [Reber] even says that he enjoys practices,” said Coach Michael Surrency.

His numerous accolades and record-breaking performances are truly results of his tireless dedication.

“My favorite part of running track is that the training you put in enables you to see results,” said Reber. “Hard work puts you in the position to win.”

Reber, along with the other sprinters on the team, participates in multiple speed workouts with Coach Phillips and Surrency on a daily basis. Exercises such as split 500’s, which consist of running a timed 400-meter distance followed by a 100-meter dash, along with a lot of other race-paced exercises that increase the runner’s endurance.

Reber has definitely reaped the benefits as his strong winter and spring performances have propelled multiple colleges and universities to develop interest in signing the track star to a scholarship. And even with all the attention, Surrency truly appreciates Reber’s attitude towards his teammates and coaches.

“Alex is a great teammate who does whatever the team needs him to do for them and himself.  He’s a great kid who is very coachable,” said Surrency.

East fans and friends can definitely feel confident that their native son will make them proud at the next level, as long as he keeps up his devotion and commitment to hard work and helping his team win.