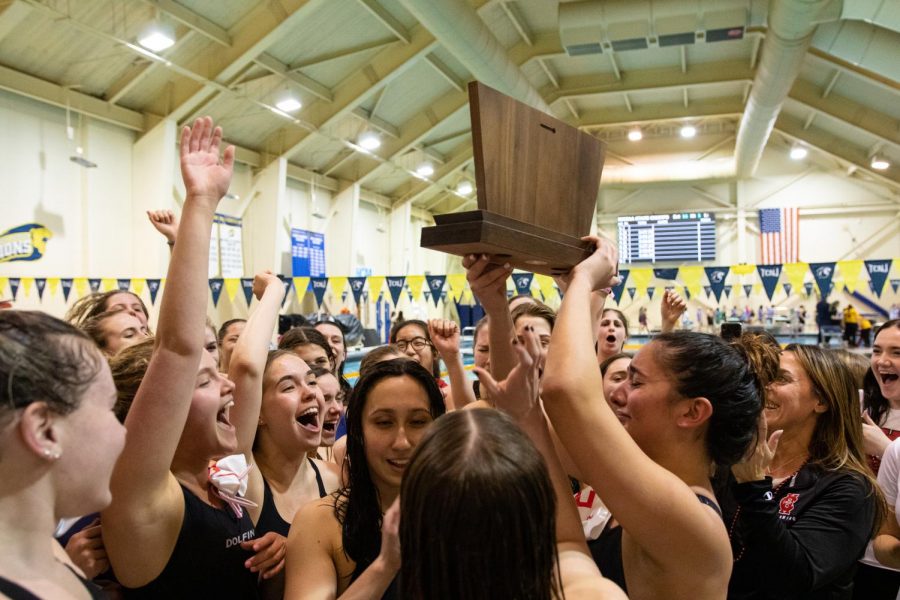 With a wave of red across the student section, East sports, recently, has brought back a lost spirit of school pride. During the winter season, East sports have represented the Cougars with a myriad of successes. Both the Boys’ and Girls’ Swim Teams won Public A State Championships, with the boys winning their second consecutive state title. While the girls have consistently competed for the championship, this year marked the first time in 21 years that they have captured the title. Both teams defeated Bridgewater-Raritan, and both meets will go down as ones to include in history books.

On the night of February 21, the Cherry Hill East Girls’ Swim Team gathered for one last pasta party. In their final bonding session, Grace Yoon (‘20) was adamant about watching “Miracle,” a movie recognizing the USA Men’s Hockey team beating the Soviets at the 1980 Winter Olympics, exactly 40 years before their state championship meet. The movie showed grit, bonding and the idea of coming together as one to rise above their opponent, and the girls did exactly that the following day.
On February 22, the East girls made history as they were able to claim the Public A title and end the four-year win streak of the Bridgewater-Raritan team, beating the Panthers by a score of 88-82, led by Coach Ms. Anita Bowser.

The East girls seemed to be in command of the meet after Yoon touched the wall first in her 500 Freestyle, gaining her a time of 4:56:70. Yoon’s impressionable swim clearly stood her out as first place and seemed to “seal the deal” for the Cougars. However, seconds after Yoon finished, she was flagged for disqualification. While at first disqualification seemed to anger the East team, it was only a small roadblock. Using this as momentum, Yoon was able to bounce back in her 100 Breast with a time of 1:02:46, taking first place.

Yet, it all came down to the final event: the 400 Freestyle Relay. With a score of 80 to 76, in Bridgwater-Raritan’s favor, the East girls had to take first and third place. With a last-minute decision to switch Yoon and Emma Dimter (‘23) into the B lane with Meghan Finnegan (‘23), Emily Fekete (‘23) and Angela Merch (‘22), the East girls went above and beyond, taking first and second. The final event started off with the A lane taking first with a time of 3:34:83 and the B lane coming up second with a time of 3:36:94, which was 0.3 seconds ahead of Bridgewater Raritan’s A lane. With the final swim earning the Cougars the title of state champions, the girls led an emotional victory for the Cougars.