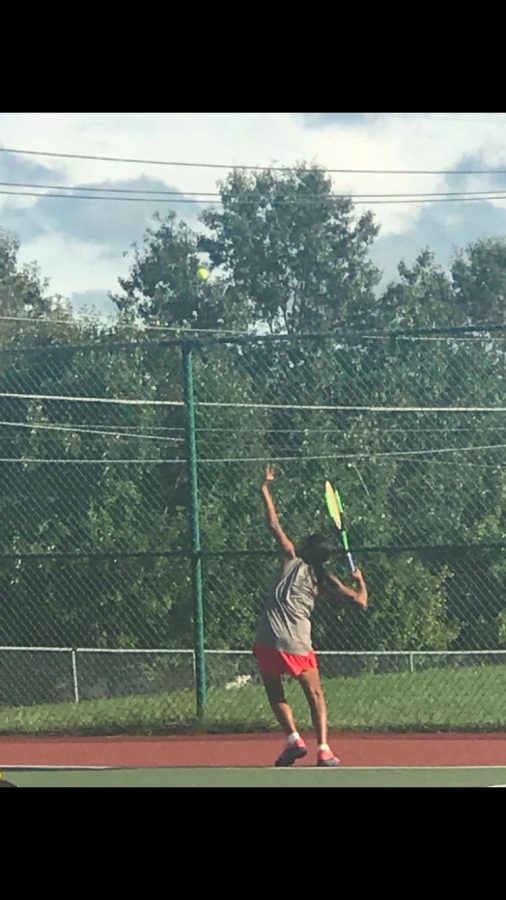 Pallavi Goculdas (‘20) practices her form on the tennis court.

Pallavi Goculdas (‘20) may not be a household name like Serena or Venus Williams, but if you ask people familiar with Cherry Hill East Tennis, they sure know exactly who Goculdas is. Since picking up her first racket at the age of six, Goculdas has followed in her father’s footsteps who’s passion for ping pong and squash easily led to her interest in tennis. Growing up, Goculdas primarily participated in soccer and swimming, but she never truly put her racket away. It was not until she was ten years old that she hung up her cleats and put away her bathing suit for good; it was all about tennis.

As a junior at East, Goculdas knows that the challenges she faces are not just on the court but also in the classroom. The leadership quality she shows on the courts follow her into the hallways, as she participates in several clubs and activities.

“Tennis is a sport where you can show class and sportsmanship,” said Goculdas.

Working hard is nothing new for Goculdas, as her brother now plays tennis at The College of New Jersey. She knows the dedication and commitment it takes to be the most competitive player possible, which she learned from her brother. Her days begin early and end late; between practice and school work, she has learned how to manage her time and keep focused on her goal – play tennis in college for a Division I school.

Although Goculdas may be well known around East, she is also ranked in the top ten in New Jersey. Goculdas’ does not play in matches that take place only in New Jersey. She participates in international tournaments and travels the country for tournaments and special events. Between tournaments and matches for East, Goculdas has racked up several awards, including winning the Olympic Conference this year. To most, tennis may seem like it’s all about the individual, but Goculdas has been recognized for her sportsmanship. As a team, East has been doing pretty well this season.

“Our team is more like a family than just a tennis team,” Goculdas said.

Throughout the season, the team has had a stellar performance and currently is holding a 14-3 record. When playing a competitive sport, no game or match is ever won by one individual; there is no “I” in “team.”

“If we play our best and work hard, we can do [win states],” Goculdas said.

As this season is coming to a close, there are many aspirations Goculdas hopes to attain individually and as a team at States. Given what is known about Goculdas and East Tennis, the other teams will have a lot of  “love” and East will have nothing but “aces.”