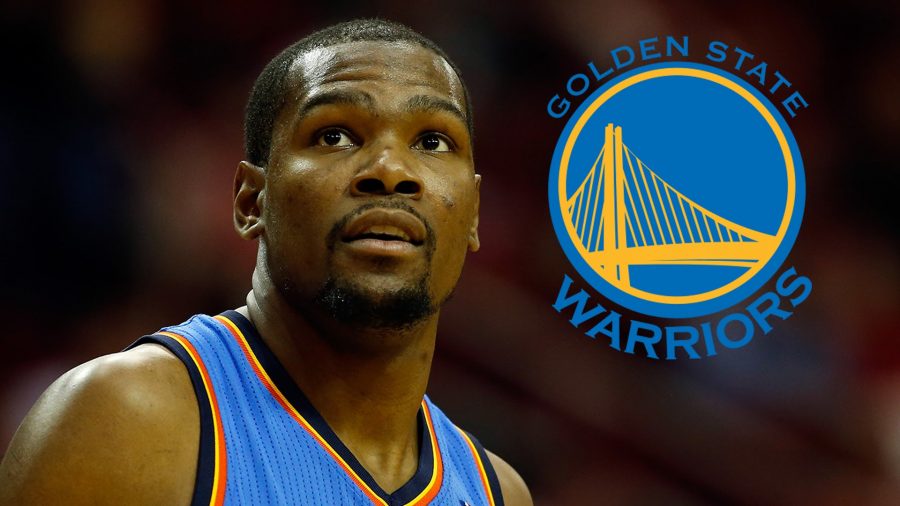 With the recent signing of Kevin Durant to the Warriors, the topic of corruption in sports has arose once again, this time turning towards the National Basketball Association.  With Durant’s signing, the Warriors will now possess a lineup of reigning MVP Steph Curry, 2014 MVP Kevin Durant, Klay Thompson and Draymond Green.  Some are dubbing this as the “Big Four,” and a lineup that has potential to be the greatest of all time.

The Warriors are already a successful franchise, having won the NBA Finals in 2015 and sporting the best record in NBA history this past season.  The addition of Kevin Durant has added fuel to the fire and newfound “enemies”.  The signing has made the Golden State Warriors come off as a monopoly and a sure thing for the championship.

This particular signing stings harsher than others because of the way it happened.  Durant was a homegrown player for the Oklahoma City Thunder and played his heart and soul out for the team and the fans.  He played nine seasons for the franchise, bringing home a Rookie of the Year award, seven All Star appearances, one Most Valuable Player award, and one NBA Finals appearance in 2012.  Fans loved Durant and knew a championship was in the midst.  But his signing with the Warriors was nothing but a punch in the gut for the fans.

The idea of leaving a franchise for money and championships is nothing new.  Back in 2010, LeBron James left his hometown Cavaliers after failing to win a championship for seven seasons to take his talents to South Beach and join the Miami Heat, where he won two.  We all know what came next; he returned to Cleveland where he finally won the coveted championship for the city and the fans.

However, the Durant signing is different.  LeBron joined the Miami Heat after a 47-35 season and the addition of Chris Bosh.  Kevin Durant joined the Warriors after a historic season in which they were arguably the best team in NBA history.  Adding a superstar to an already star-studded Warriors squad will significantly hurt feelings about the league.

In recent years the NBA has fielded teams that hold major advantages over other teams, more so than other sports.  The ‘90s saw the Chicago Bulls win two ‘three-peats’.  The early 2010s saw Miami’s ‘Big 3’.  Now, the Warriors will field the ‘Big 4’.  In other sports, rarely does a team carry multiple superstars.  Sure, a team can be very good, but it is rare to find multiple league MVPs on the same team.

The Kevin Durant signing is only another reminder that sports can be very corrupt.