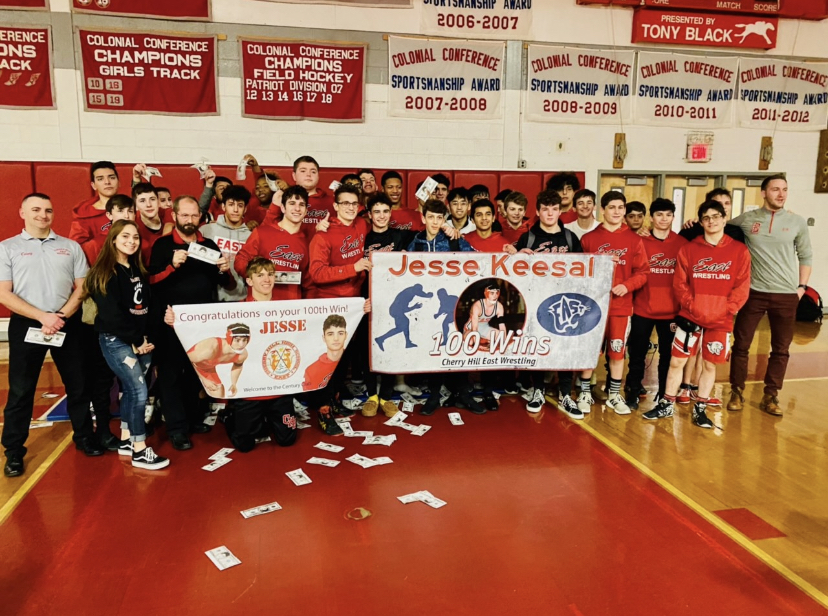 “It’s exciting, I’ve been working at it my whole high school career,” Keesal said. “It’s a big relief finally getting there.” This win puts him at a remarkable record of 31-2 so far in his senior year, 14 of those by pin. This is turning out to be Keesal’s best year of high school wrestling, following an almost equally dominant junior campaign, where he went 31-7 again 14 wins by pin.

Ever since second grade, Keesal has competed in this sport with passion and dedication which got him where he is today.

“My brothers wrestled, so I was always into wrestling,” he says. “I always knew I would come to East and wrestle.”

“Wrestling’s a great sport and I love everything about it. Just getting to go out there and put on a singlet that says ‘East’ is pretty great.”

Coach Brown has also been a huge part of Jesse’s wrestling life. “I’ve known him since he was born, so this is special for me,” he said, “Not many people reach the century mark, it’s incredible.”

Keesal, returning the sentiment, said, “[Brown has] been a big part of my wrestling career, coming to high school is a big step up for wrestling, and Brown really helped my transition from middle school to high school and got me prepared for what I was gonna see in the future.” As if it weren’t obvious, reaching 100 wins shows how well this connection has paid off. Coach Brown couldn’t keep from complimenting his captain either.

“Being a two-year captain for the team now, everyone looks to him as a leader, not just vocally but by example,” he says. “All the younger kids idolize him, they want to be him.” He jokingly said, “I give the credit to the mullet.”
Jesse also likes to keep busy with the sport year-round. Outside of wrestling for East, he does clubs during the summer, and at other points in the year. He gives more credit to club coaches John Casey and Travis Boardman for helping him develop not only as a wrestler but as a person.

Throughout his time at East, Keesal has worked hard to get to districts, where placing in the top three advances you to regionals. He placed in fourth for districts freshman year and was unable to compete in districts sophomore year due to a broken foot towards the end of the season. He took second in his junior year but didn’t place in regionals.

One hundred wins do not mark the end for him this year as he has high aspirations of getting back to regionals, and maybe even moving onto states.
Although not deciding on a college yet, Keesal does want to continue his wrestling career past high school.

Keesal’s accomplishments on the mat are nothing short of incredible for a four-year career. He has shown just how much his hard work has paid off and shown what a true student leader is.