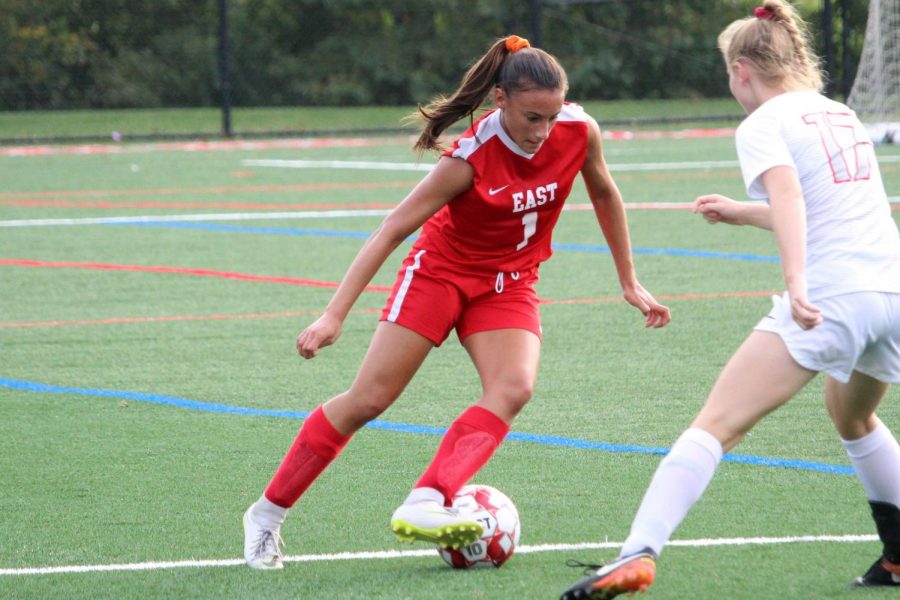 Rossetti ('20) makes a move and dribbles around a defender.

Isabella Rossetti (‘20) recently committed to Kutztown University, located in Berks County, Pennsylvania, for women’s soccer. Rossetti has been playing for 11 years and is looking forward to continuing her soccer career playing at a Division II level.

On the East field, Rossetti plays outside forward or attacking center midfielder. Being a midfielder, Rossetti spends a lot of time running back and forth across the field. Rossetti has a tight practice schedule, including practicing three to four times a week to make sure that she can keep up on the field.

Rossetti is currently juggles two teams. She spent, and will continue to spend, many hours practicing on the East team and now continues to do winter training and playing with her travel team called SJEB Rush. She is on the 02 Girls Academy Blue Team. Rossetti’s elite travel team helps her to further and perfect her skills.

During Rossetti’s childhood she was never really into soccer, but she ended up growing into it.

“When [I] was very young, [I] honestly was not that interested in playing soccer,” Rossetti said.

Rossetti worked really hard to understand the game, and as she got better, she really started to enjoy it more. That is when her passion grew stronger and stronger. Once she had a higher skill level, she began to advance to higher and more successful teams and began to have more fun.

Rossetti, like other athletes, must mentally prepare for games.

“I stretch and stayed hydrated so [I] can perform the best as possible,” Rossetti said.

Rossetti, during warm ups, gets focused and remains concentrated to make sure that she can play to the best of her ability.

Rossetti not only committed to a highly ranked school, but she was offered at a younger age than most. Rossetti, only being a junior, has accomplished so much and was credited with such a high achievement only in her third year of high school.

Not only did she get offered as a junior, Rossetti hasn’t been playing for as long as most soccer players. Rossetti began playing at a high level, when she started at East. East soccer really enhanced her love for the sport and she can’t wait to continue to play next season.

In 2020, Rossetti will be attending Kutztown University. This past week, Rossetti went to visit and had an amazing experience. She felt very comfortable and could envision herself going there.

“I started walking around campus I knew it was the right fit for me,” Rossetti said.

Rossetti cannot wait to further continue her education and athletic career at Kutztown University in two years and play a sport she grew to love.