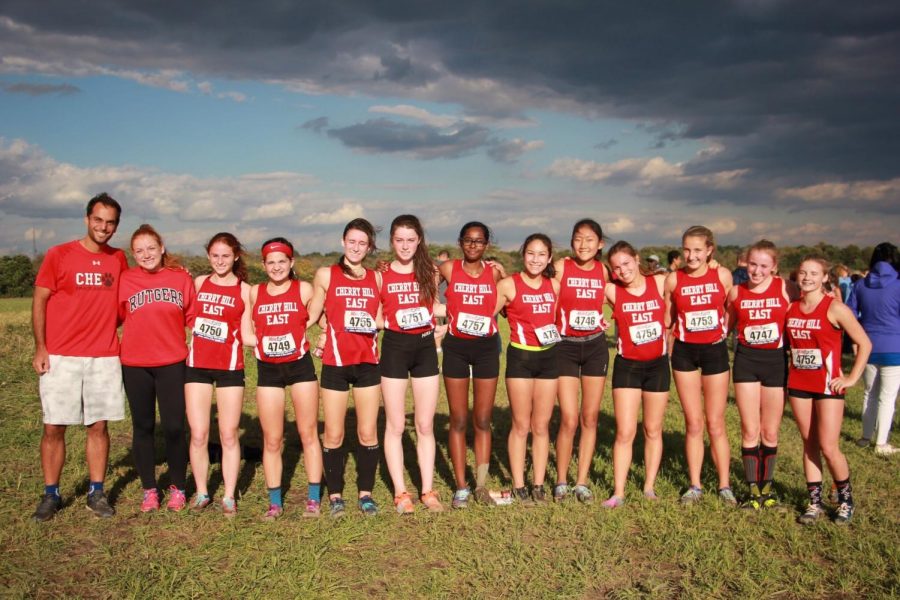 The first runner crests the hill and bounds down the other side, as she races ahead of her competitors. The second and third runners trail behind, running alone and desperately trying to catch up. Their furrowed brows and puffed-out cheeks reveal how grueling the course is. Suddenly, a pack of red uniformed girls emerge from the top of the hill. They look strong and composed as they feed off of each other’s energy. By looking closely at their singlets you can see they are from Cherry Hill East.

The Cougars have had one of their most successful seasons in East history. They regularly beat teams in their conference by at least thirty points and are now ranked third in South Jersey. They won the South Jersey Open and the Olympic Conference Championships for the first time since 2006, and their second championship victory of all time.

Cross country is generally thought of as an individual sport, but Coach Anthony Maniscalco attributes their recent success not only to the unprecedented depth of talent, but to the cohesive attitude his team has developed.
“In past seasons our success has been contingent on a few runners,” Maniscalco said. “This year we are not dependent upon one individual… our success is team oriented.”

The team got off to an auspicious start, as many girls began showing up to optional practices back in July before the official season schedule was out. This level of widespread dedication has resulted in about twelve runners capable of running for a seven-person varsity team. This depth allows the girls to train together, and push each other to stay on pace during workouts such as tempo runs.

One of the team’s focuses has been on regimented training. The girls use pace charts that tell them how fast to run each day so that they save their best for when they race. A good diet and proper hydration is also encouraged.
The Cougar’s dominance has also resulted from a new focus on strategy. The team values placement over time, which has impacted the way they race. Maniscalco says the girls have become more aggressive and start races in the top ten, which allows them to “wear teams down, and put themselves in a good place to finish well.”

Sarah Pierce (’19), the leading runner on varsity, believes the team dynamic has been different this season.

“Racing together has enabled us to help each other adapt to tough course conditions, and pass runners from other teams in order to get us into those top spots,” Pierce said.

The Olympic Conference meet was run at Holmdel, which is the fifth hardest course in the country. Pierce, Marykate McCurdy (’21) and Madison McNiff (’22) made the All-Conference team.

Maniscalco is optimistic about the team’s future. He believes the girls have the potential to run well at states, and to have continued success next year. The depth of talented underclassmen shows promise to take the team to new heights over the next few seasons.