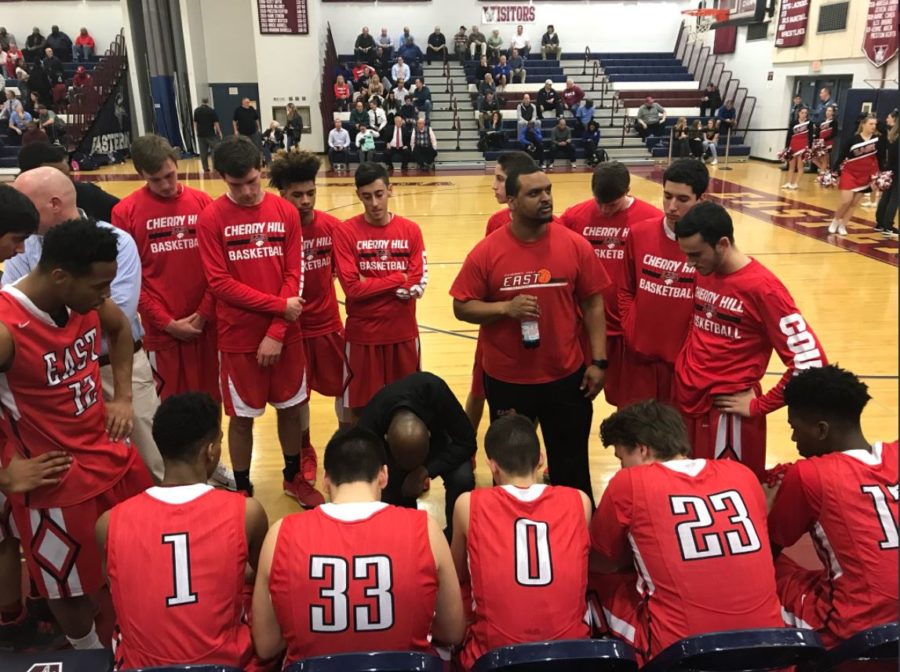 The East boy's basketball game in their pre-game discussion

Despite Cherry Hill East rallying back from an 18-point deficit, Eastern’s Matthue Cotton (‘18) hit a game-winning layup for a final score of 58-56 in an exciting yet disappointing end to the Cougars season. After a humiliating first half, as the Vikings led 35-18, the Cougars outscored Eastern in the second 38-23.

Entering the game, there was a distinct height advantage for Eastern and the Vikings strong defense led to a lack of offensive playmaking for the Cougars. It was already a disaster, but as East was inbounding the ball in the last seconds, a miscommunication led to an easy steal and layup. This provoked immense rage in East Coach Dave Allen. During the intermission, he ripped on his team for the careless mistake.  The game started off terribly as the Vikings devastated East 17-6 after the first.

In the second, the Cougars offense doubled their first half score, but there was still little defensive presence against Eastern. Barbera had eight points in the second, including two threes. With three minutes left in the half, East went on a short eight-point run but was immediately answered by the Vikings and Cotton hit a step-back three as the buzzer sounded.

As the third arrived, East played with a sense of urgency. Every possession Ryan Greene (‘20) pushed the ball downcourt to Serata, Gibson, or Prendergast on the perimeter. If not, one of the guards penetrated to the paint for an easy pass leading to a layup for Dienye Peterside.

East went on run headed by Gibson’s floater bringing their deficit down to 12 before Cotton knocked down a three. The Cougars kept pushing as Serata hit a three to bring the game within nine with less than two minutes left. Eastern held for the final shot and Cotton hit another three-pointer at the buzzer. The Vikings led 51-41 heading into the fourth as the Cougars scored 23 in the quarter.

The fourth was similar to the third as East continued their fast-paced offense, but Eastern slowly began to crumble. Serata opened the fourth with a three and with over five minutes left, it was a five-point game. Serata hit another three after an Eastern score making their deficit down to four. Then Gibson tied the game again as Cotton and the Vikings continued to miss shots. The last three minutes was a defensive battle before Serata was sent to the line and tying the game at 56-56.

With 30 seconds left, Cotten held the ball as the clock went down to ten. He drove left right by his defender Serata into the paint, got by Prendergast, and finished the layup with four seconds left. On the other end, Serata got blocked in his three attempt and the game was over.

The Vikings won a tough contest against the Cougars as they advance through the playoffs, and the Cougars end their season in a heartbreaker.