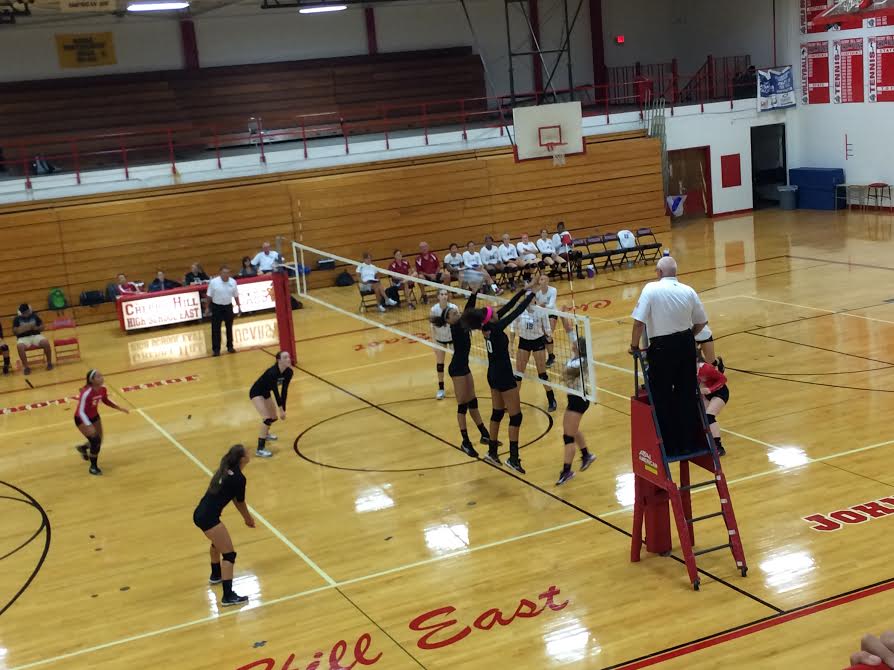 East vs. Washington Township in an intense volleyball game.

Cherry Hill East Girls Volleyball defeated Washington Township Girls Volleyball Friday, September 17. East’s team entered the Dibart Gym with a record of 0-1 following a tough loss against Rancocas Valley, but left the gym 1-1 after dominating with a score of 25-15 in both sets.

“After a long preseason we played RV on Wednesday, and I saw a few fixes to make. We went in to practice, put a lot of effort in, added a few new lineups, and I think it really paid off today,” said Coach Mooney.

In the first set, Township was first on the scoreboard, but it didn’t take long for East to come back and tie the match at 3 in the first set. East’s momentum helped lead the team to seven consecutive unanswered points, and East controlled the set at 10-3.

Chelsey James played an important role at the net as she went up for big blocks, and East maintained the lead in the first set. Township took a timeout as an attempt to slow the Cougar’s momentum after Kelly Babitz (’17) executed a precise kill, optimizing East’s dominance and making the set 16-5. East, with a comfortable lead, eased up on the pressure, allowing Township to squeeze few points out of the set. Ultimately, East won the first set 25-15.

Township scored first at the start of the second set, now 1-0, but it wasn’t long before East tied the match and pulled away with the set. The Cougars continued their control of the match as the lead climbed to 10-5. Township picked up its pace, going toe-to-toe, point-for-point with East. However, masterful assists from Megan O’Rourke (’16) set up kills that would put East up 19-9. At this point, the win appeared inevitable, but Township wasn’t ready to give up easily. The second set finished 25-15 with East on top.

East’s win was propelled by Babitz’ who led the team with 9 kills, followed by captain Jesse Wrinn’s (’16) 6 kills. Also, O’Rourke commanded the court with a total of 17 assists.

“We lost five All-Conference players from last year, four of them were All-South Jersey. We have a long way to go to be where we were last season, but we have some good young talent, and I look forward to seeing how we do,” said Coach Mooney.