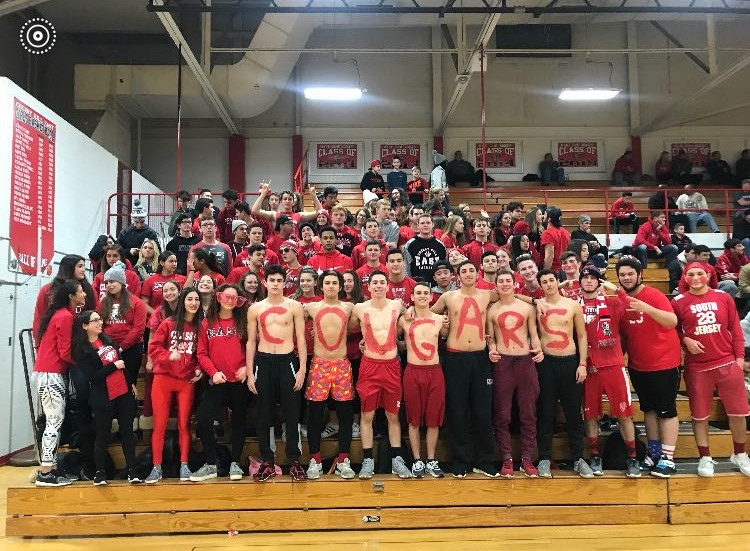 East fans root for a win against West.

The Cherry Hill East Cougars varsity basketball team was defeated at home by the Cherry Hill West Lions in a very close 55-53 game as part of an invitational tournament being held at East.

Despite the loss, the Cougars had multiple impressive performances from their starters, including a 21-point outing for Carl Gibson (‘19) as well as 11 points from Sam Serata (‘19), which included two three-pointers. West had four double-digit scorers in the contest.

East got off to a slow start, trailing 4-0 early before Jared Ohnona (‘18) scored an and-one layup on a fastbreak with 4:48 left in the opening quarter to break the shutout. A Gibson jump shot and a Serata three-pointer helped bring the Cougars right back into the game with a 10-3 run to take a 10-7 lead late in the first. West, however, responded with a 6-2 run that included a jump shot as time expired to take a 13-12 lead at the end of a back and forth first quarter.

The Lions had a nice block in transition in the midst of an East run to begin the second quarter, but the Cougars were able to open up the score with a 9-2 run to make it 21-15. A productive second quarter from Gibson was one of the highlights of an exciting first half that concluded with a 27-20 East lead.

West came out of the halftime break with a comeback on their minds as they opened the third quarter on a 7-1 run. They were fouled on a three-point attempt soon after and made two of the three ensuing free throws, and just like that the Lions led 35-34. East ended the quarter on a 6-0 run that featured a floater from Gibson as time expired. East held onto the momentum in the third quarter, leading 40-35 after three.

West came out firing once again to open the fourth quarter, but this time East was struggling to respond. An awkward looking three that somehow banked in was part of the Lions outscoring East 18-8 in the fourth quarter with two minutes left, and West led 53-48. A layup from Josh Hall (‘18) cut the lead to three. He then drew a foul after East stole the ensuing inbound pass, but missed both free throws.

Gibson responded to a West score with an and-1 with 57 seconds left. West then turned it over due to a travel, followed by them forcing a jump ball. East inbounded the ball with four seconds left from behind their own basket, but Serata missed a jump shot and Hall could not get the put back to go in. The West fans then stormed the court after a thrilling game that came down to the wire.

East will play their next game at home against the Winslow Township Eagles on Tuesday, January 2. West next plays on the road against the Paul VI Eagles on the same day.