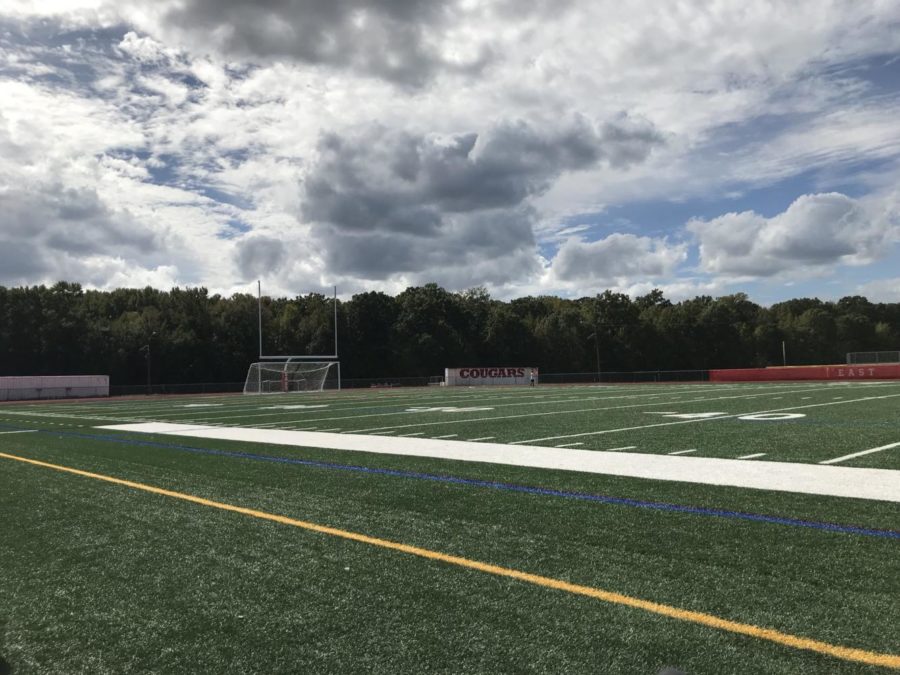 On October 7, the East Boy’s Varsity soccer team hosted the Cherry Hill West Lions for the first time ever on East soil. Before kickoff, the Cougars honored the Class of 2018 seniors: Len Asari, Sam Biotti, Matt Blaker, Chris Bruce, Greg Cohler, Eric First, Mike Kenny, Sam Miller, Rob Rogowski, Nhat Tran, and Tim Welsch. The players were accompanied by their families on the center of the field to celebrate Senior Day. The Cougars did not play the Lions last year, which made this game very important for both sides. Before the game, East’s record was 2-8-1 and West’s record was 8-4. However, the records did not define either of the two teams as both the Cougars and the Lions competed vigorously for 90 minutes.

The first half consisted of missed opportunities for both sides, but East moved the ball well, allowing them to get many shots on Lion’s goalie Chace Sgouros (‘18). At the end of the half, after a constant back and forth game, the score remained 0-0.

It was not until the last 10 minutes of the second half when the Cougars were finally able to put the ball in the back of the net. The goal came off a corner kick by Welsch and was headed in by Mark Basehore (‘19), making it 1-0. Only a few minutes later, the Lions answered back with a header by Jason Kahan (‘18). Prior to Kahan’s goal, some confusion from the referees caused frustration for goalie Nick Feldman (‘19) and Coach Melograna. With the second half coming to a close, both teams were very aggressive in trying to stop the game from going to overtime. Neither team was successful in their attempt to score, causing the game to go to overtime.

The overtime consisted of a 10 minute golden goal period, meaning that the first team to score would win the game. It came down to a give-and-go pass between Eddie Grant (‘20) and Rogowski, which allowed Grant to strike the ball into the net to win the game for East.

After the game concluded, Coach Melograna had a few words about the win. When asked about the game-winning goal by Grant, Melograna said he was proud of him, but more importantly, he was proud of the entire team’s efforts throughout the game. This game was a dream come true for Melograna, who had been wishing for an East vs. West soccer game to be played on East soil since he was 16 years old. This was not only a huge achievement for the team, but also for the entire Cherry Hill East community. East, now 3-8-1, will play their next game on Tuesday, October 10 against Washington Township.