East Boys Basketball triumphs as a stronger team against Lindenwold 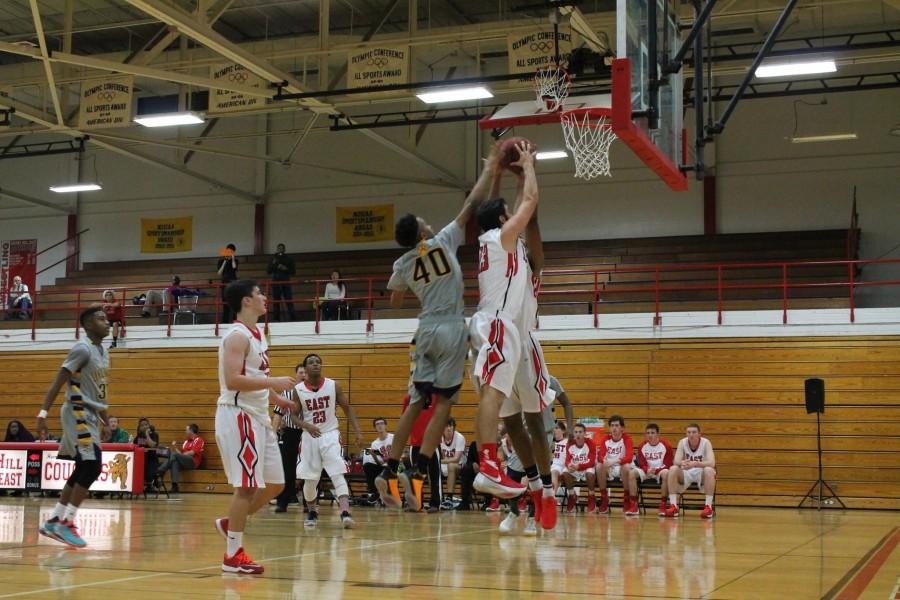 As schools closed down for winter break, the Cherry Hill East and Lindenwold High School Boys Basketball teams laced up their sneakers. East stepped out onto the court with the singular goal of staying undefeated. East and Lindenwold both started the season strong, each winning their first two games but only one would move to be 3-0. East would prove to be the stronger team as they defeated Lindenwold 67-36.

East clearly outsized the much smaller Lindenwold squad and it ended up showing on the scoreboard as starting East center, Tim Perry (’16) would put up 26 points and 27 rebounds. A combination of Perry’s scoring and rebounding led East to a 12 point lead by halftime. Junior, Evan Campbell (’17) also played a big role in the game by smoothly working the ball around and dishing out seven assists in the first half alone.

Additionally, East scored from the outside with Josh Hall (‘18) and Joey DiAntonio (’17) both hitting long range three pointers; DiAntonio’s three pointer put the Cougars up by 18 with less than three minutes remaining in the third quarter. East began to lose focus and became frustrated with multiple miscommunications, turnovers, and fouls but Coach Dave Allen pulled them together.

Throughout the game, Lindenwold seemed lifeless but Bryant Geddes (’16), the Lion’s highest scorer, attempted to carry his team to victory but failed finishing the game with 15 points and a memorable dunk. However, Geddes was not the only one to throw down a dunk in the teams’ battle. Perry slammed three massive dunks down Lindenwold’s throat to add a little salt in the wound. Clearly, Perry seemed to be the driving force of the Cougars but he did it with the help of Colin O’Donnell (’17) who was able to grab ten points and nine rebounds of his own.

From the start of the game, East took a commanding lead and did not look back. East defeated Lindenwold by 31 with a score of 67-36. The Cougars advance to a solid 3-0 on the season as they look to beat up on Cherry Hill West December 30.