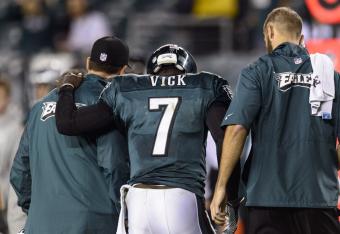 The Eagles record after week eight, the halfway point of the NFL season and the first eight weeks of Chip Kelly’s tenure in Philadelphia, is 3-5. Additionally, the Eagles are 0-4 at home, and have not won a game at Lincoln Financial Field since September 30, 2012—13 months ago, today.

Beginning long before week one, the Philadelphia Eagles had high expectations with their new, exciting coach Chip Kelly, who had coached the University of Oregon Ducks since 2009. The team has not met these expectations in the least, experiencing problems both on the offensive and defensive side of the ball.

During 30 minutes of their week one game against the Washington Redskins, Chip Kelly seemed like the savior of the Philadelphia Eagles. Up 26-7 after running 53 plays in the first half of the game, the Eagles came close to the record for the number of first half downs. Since the half, the Eagles’s season has taken a relatively steep decline. After winning week one 33-27, the team played their home opener against the San Diego Chargers, during which the offense players high powered, and the Eagles only lost at the last second on a Nick Novak field goal. The trouble the Eagles encountered was a lackluster defense, which nearly blew the game in week one, and could not stop San Diego QB Phillip Rivers, as he threw for 419 yards and 3 touchdowns.

The next week, the Eagles played the Kansas City Chiefs on a Thursday night as 14-year Eagles’s coach Andy Reid returned to Philadelphia, falling 26-16. The Chiefs defense subdued the Eagles’s offense, their one shining point, leading many Eagles fans to lose faith only three weeks into the season.

“We got to figure this out and I’m confident that we will” said Eagles quarterback Mike Vick after the game. However, this has not been the case thus far, as the team has only played worse.

The defense hit a season low in week four against the Denver Broncos, who at that time were undefeated, losing 52-20 as Peyton Manning went on to have another great game. The Eagles’s secondary was dreadful, allowing Manning to throw 4 touchdown passes in the game. The Eagles’s top receiver was Brent Celek, who managed 57 yards.

Weeks five and six for the Eagles resulted in wins, 36-21 over the New York Giants, and 31-20 against the Tampa Bay Buccaneers. During the second quarter of the Giants game, Vick injured his hamstring on a run to the sideline, prompting backup Nick Foles to take over, throwing for 197 yards and 2 TDs. Foles played well against the Bucs as well, throwing for 296 yards, 3 TDs, and no interceptions.

With Nick Foles looking great as the Eagles backup quarterback, there was a lot of hype for the week seven matchup against the Dallas Cowboys at home in Philadelphia.

However, expectations were not met at this game. At halftime, the Eagles were unable to score a single point. The Eagles only scored 3 on the day and fell to the Cowboys 17-3. The silver lining of the game was the Eagles defense, with two interceptions and only 17 points allowed. They kept Cowboys QB Tony Romo off of the field, forcing more punts than in previous weeks.

Week 8 was another disappointment, as the Eagles lost to their 1-6 division rival Giants, 15-7. The Eagles needed this win to gain some ground on the division leading Cowboys. The team fell awfully short, as the offense didn’t score a single point, their only touchdown coming on an overthrown snap which the Eagles’s special teams recovered.

Of the very few bright spots, the Eagles defense is showing great improvement in their performance, forcing 5 field goals in their game against the Giants. Although the five scores meant five drives deep into Eagle territory, the ability to stop the offense from getting into the end zone is a step into the right direction.

The lack of offensive production on Chip Kelly’s squad may be caused by Kelly’s college-style philosophy of the game.
“Time of possession is how much time a team can waste” said Kelly during a game. Kelly feels that time of possession is the most overrated statistic in football. Contrarily, it is a primary factor in the incompetence of the Eagles’ offense. During weeks seven and eight, the Eagles held the ball for only 21 and 23 minutes, respectively. It is clear that the Eagles have not had enough time to make plays, and the final score of every game is a reflection of that.

The 15-7 loss against the Giants marked the 10th straight loss at home since barely beating the Giants in September of 2012. Unless the Eagles can begin to win at home, it is highly unlikely for them to have a successful season. At the rate the season is heading, the Eagles should go 6-10, good enough for a somewhat high draft-pick in next season’s draft. While this is an improvement on last season’s 4-12 finish, it is by no means what the team and fans want. If the Eagles can turn their wreck of a season around, however, they can win the NFC East, the weakest division in the NFL.