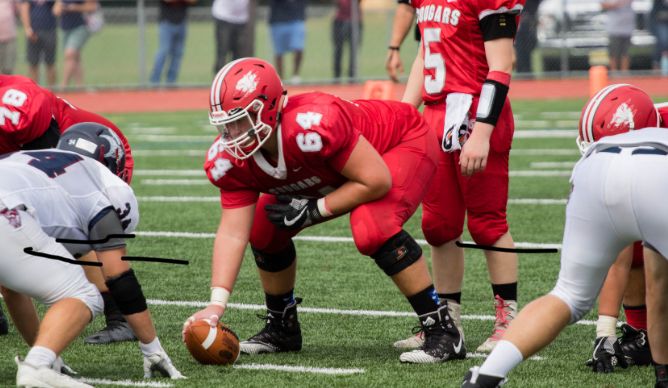 Freshman year was the first time Dom Seta (‘19) played football seriously. He wanted to play a sport that he could compete in and be around his friends. Seta decided to stick with it through all four years of high school. This decision paid off, as Seta was named First-Team All-Conference offensive line. He also won the Brooks Irvine Scholar Athlete Award for his excellence on the field as well as in the classroom. The 6’3, 275 pound offensive linemen committed to Salve Regina University to play football.

Salve Regina University is a private university located in Newport, Rhode Island. It is about a four and a half hour drive from Cherry Hill East.

Seta said his favorite part about football is the team aspect. He loves how everybody must work together in order for a team to win.

“Football isn’t dependent on one person… the whole team has to be part of it,” said Seta.

Another part of the game that Seta loves is how he can express his emotions.

“Being able to go out and hit… if your mad you can go out and show it,” said Seta.

For Seta, the recruitment process started after the football season junior year and took off from there. He enjoyed the process overall.

“The recruitment process was fun… It was kinda chaotic at times during the season but it was a lot of fun,” said Seta.

After the Seta’s junior season, college coaches started reaching out to Seta in different ways. Coaches called, emailed and texted Seta asking him to come to camps and come and visit the school. During this past football season, Seta had been visited by up to three coaches per day.

“It was fun being able to go all over, compete at camps and meet a bunch of people… while finding the right school and program that was best for me,” Seta said.

One of the reasons Seta chose Salve Regina was because of the football teams’ success. Last season, Salve Regina went 7-4 and went 5-1 in the Commonwealth Coast Conference, a Division III football conference.

“They’ve got a real good football team and an atmosphere I can see myself in,” said Seta.

“The academics just fit me better than any other school I was looking at,” he said.

Seta can not wait to play football in Salve Regina’s blue uniforms next year.