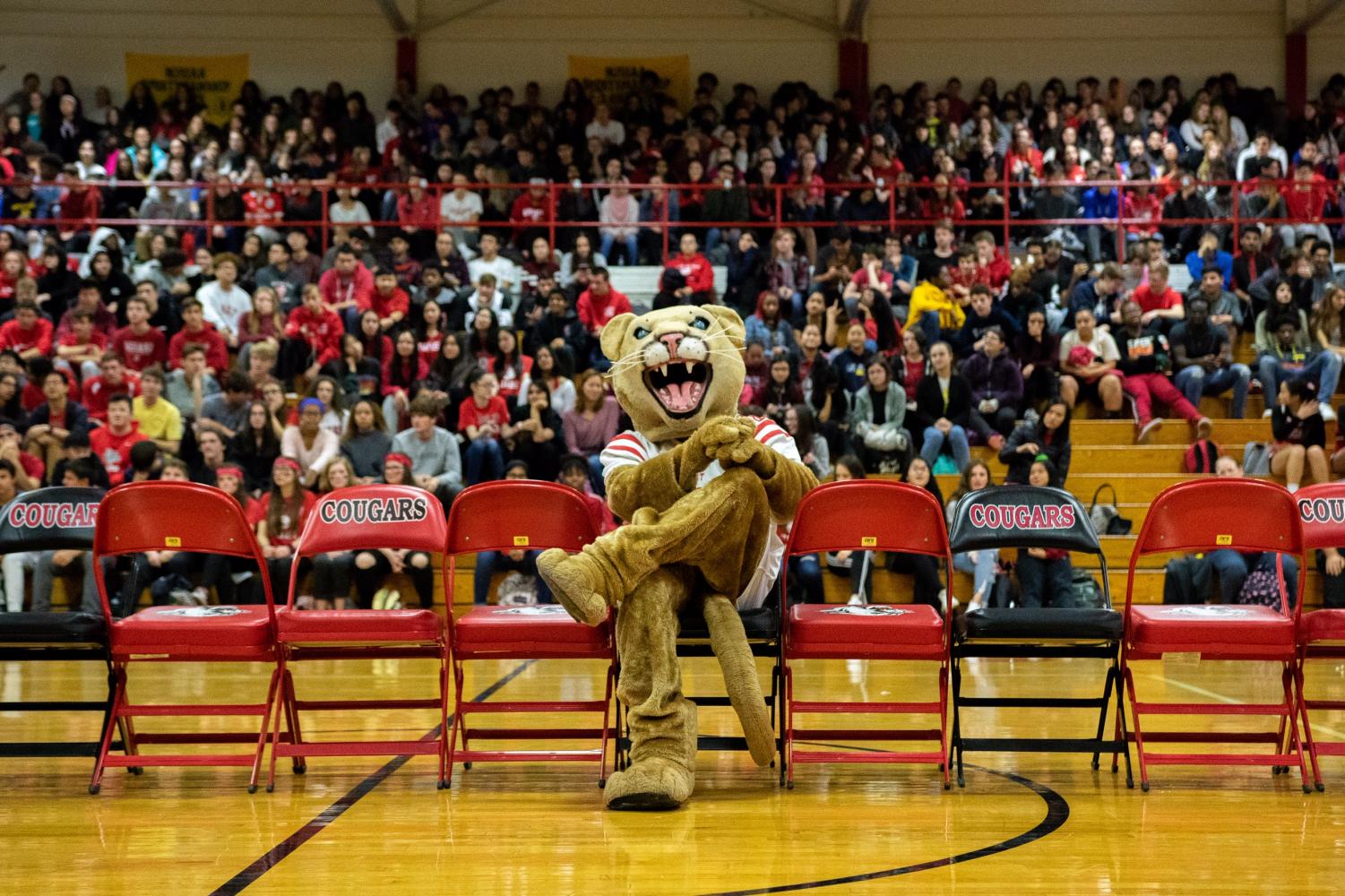 Crimson the Cougar poses at the center of a dispirited crowd. (Andrew Maier ('20) / Eastside Photo Editor)

Crimson the Cougar poses at the center of a dispirited crowd.

The Class of 2020 won their first spirit week at a spirit week pep rally utterly devoid of spirit, pep or rally.

In my three years of writing the recap for this event, I can honestly say that no rally has ever unimpressed me as thoroughly as this one. So, as a journalist, I felt I would derelict in my duty if I wrote a run-of-the-mill recap and let the stenographic style of news writing drown out my anger and disappointment at this morning’s event.

The start of the rally was spirited enough. As usual, the horns of the marching band blared in glorious fanfare. Crimson the Cougar, as energetic as I’ve ever seen him, hi-fived students as they swarmed into the DiBart Gym. The cheerleaders, perhaps the only other iota of spirit this school has left, performed to the beat. The cheerleaders then  gave a breathtaking, choreographed performance that went underappreciated by a lackluster crowd.

Then, things went way south. During the usual class roll call, which I suppose members of the Class of 2023 will have to assume was once a competition won and lost on volume and not nonchalance, barely made a dent on my eardrums.

The tug-of-war competition, which usually features spirited cheers, was lacking in its usual competitive fervor. While loud rock music filled the gym, the volume level still left something to be desired.

The usual aspects of the rally, the honoring of all-conference athletes and character education students, were done with at least a usual nonchalance from the crowd, merited or not. However, the football team introductions felt as though the East Cougars were off to face a team of 5-year-olds and not our sworn, cross-town rivals.

And, when the seniors were crowned as the winners of spirit week, there was an ironic lack of spirit. Coronations tend to be stately, solemn affairs in the real world, but some semblance of excitement would have been nice.

There were moments of whimsy (brought back from their absence last year). Aiden Weingrad (‘21) defeated Mr. Greg Gagliardi in the final round of a lively (thank god) game of dancing musical chairs.

But overall, the pep rally was just a boring excuse for the marching band to blow my eardrums out again (I loved every minute of their performances, mind you, but my ENT surely won’t).

TONIGHT: The Cougars will face the Lions at Cherry Hill West at 6 p.m. Make sure to wear white.

EDIT: An earlier version of this column made an insensitive reference to a funeral. That reference has been struck and the paragraph it was in rewritten.

Check out pictures from the pep rally below.