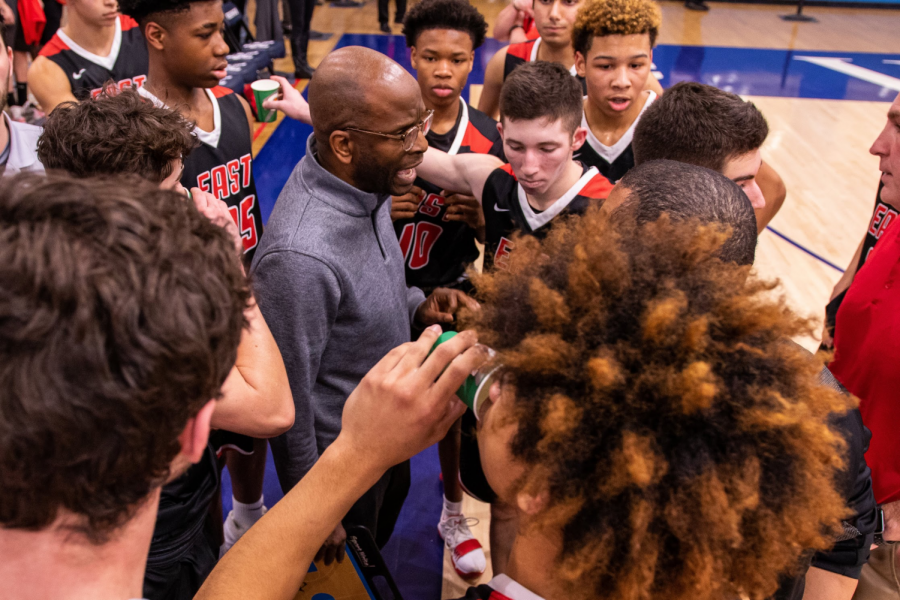 Coach, Dave Allen, talks to his athletes during half time.

It was one heck of a season. The No. 4 Cherry Hill East Cougars finally fell to the No. 3 Atlantic City Vikings in a gut-wrenching game on Tuesday evening. The scoreboard does not tell the story of this contest, as East kept the game close through one half of play. A poor second-half performance where the Vikings were able to take control of the tempo cost the Cougars in the end.

In a year where not many expected a team with three sophomores, one senior and a junior starting every game to win many games at all, the Cougars truly exceeded expectations. By reaching the NJSIAA South Jersey Group 4 Conference Championship, East showed the rest of the state that they are not a team to take lightly.

The game looked smooth for East from the start. Long possessions and shots being converted from deep let the Cougars neutralize the fastbreak capabilities of Atlantic City. Jake Green had two threes, while Matthews-Spratley had one of his own to provide steady scoring in the first period. Atlantic City played tough in the paint, able to use size and athleticism to score, but a bad percentage of shots were falling for them from deeper. The quarter ended 9-9.

The second quarter went even better for the Cougars. More shots were falling for East, who went 6 of 12 from deep in the half. Ryan and Drew Greene continuously drove inside, only to be met by a 6’7 Stephen Byard (‘20), but even he could only watch as their teardrops fell off the glass. Jarren Andrade (‘20) entered the game and hit a deep corner three to sway momentum back in East’s favor. Atlantic City outrebounded East all game, but the Cougars game plan was to put up shots that wouldn’t need second efforts. East took a 24-21 into the locker rooms.

The narrative changed from this point on. East seemed like underdogs before the game began, as experts and fans alike picked A.C. to win the contest, but it took a full half of play to finally see why. The Vikings began to trap East inside their own half-court with the tightest defense the Cougars have faced all year. A key defender was Sharon Watson (‘20) who was able to force several turnovers and hit a step-back jumper that hushed the large Cherry Hill crowd. Another play saw Byard throw down an arching alley-oop off the glass. Atlantic City made East fight for every inch of space on the floor, proving to be too athletic for the smaller Cougars to handle. They took a 40-30 lead into the fourth quarter.

The Cougars continued to fight, though. East has had an intensity about themselves during almost every game this season that is unparalleled. Even down by ten, they continued to fight through the contact of A.C. defenders in order to keep their Tournament of Champions aspirations alive. The deficit that formed in the third quarter was insurmountable in the end, so the decent shooting in the final frame was without impact. A.C. won it, 61-44.

Whether it was the beads of sweat dripping off of every player after the game, whether it was the 200+ fans that made the hour-long trip to show their school and team spirit,or whether it was the feat of making a Conference Championship game when it seemed like an unreachable goal… This Cougars season has been a demonstration of what unity, pride, dedication and cooperation can turn into.