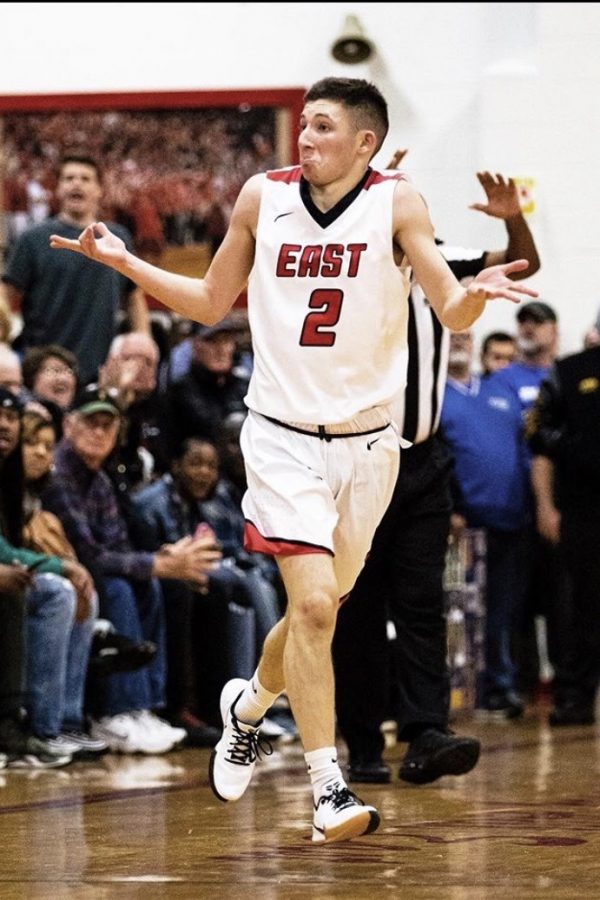 The Cherry Hill East Cougars (16-4) remained undefeated at home in a double-overtime victory over rival Cherokee Chiefs (14-7) on Tuesday. East won their 10th straight game in thrilling fashion, as a tight contest was eventually divided in the sixth period of play at Dibart gym. Jake Green (‘22) heated up in the third quarter to keep the Cougars in striking distance while being down the stretch and secure an important conference win.

Ryan Greene (‘20) dropped 16 points and added 8 assists, while his brother, Drew Greene (‘22), scored 14 points, but fouled out late in the game. Jake Green finished with 19 points, including 4 threes, to help out duel a red-hot Cherokee team in front of a sea of East fans.

The game began with energy from both sides and tight defense. Cherokee had a size advantage at most positions on the floor, but a swarming East defense held them to just 9 points in the quarter. East scored 11 points, most of which came in transition after a couple of blocks and steals.

In the second quarter, East stayed pinned to the opposition on the defensive end, led by Ryan Bloom (‘21) who made many key hustle plays in the quarter. E.J. Matthews (‘22) finished with six rebounds of his own on the game, many of which came in this quarter. Drew Greene had 10 points by halftime as well.

During their first match-up, East used a box-and-one on Cherokee senior guard Gavin Gibson (‘20), who is averaging 20 points on the year, but this time out they played a normal zone to mark up the rest of the team as well. Swarming defense in the paint and twitchy transition plays allowed East to fluster Cherokee players into only 16 points at halftime, but the game remained close.

East’s three point lead barely expanded in the second half as the game got even tighter. A Cherokee run after offensive adjustments quieted the crowd for a period of six minutes. The morale in the arena changed, however, as a flurry of Jake Green threes fell, giving East a 33-27 lead heading into the fourth.

The fourth quarter was a scrappy affair in which each team traded baskets, allowing East to continue their lead. With three minutes left, East was up seven and looking well on their way to a less than enthusiastic conference win, but then Cherokee began to foul… And things got interesting.

Ryan Greene (‘20) was sent to the line three times in the fourth quarter and came away with little to show for it, allowing Cherokee to mount a comeback in which Gibson and sixth-man Ethan Stith (‘21) combined for the majority of their points and tied the game up late with a Gibson score. It was 45-45 heading into overtime.

This is where things became unorthodox. The first overtime period saw Ryan Greene convert a layup and free throws, while junior Noah Rose (‘21) came in for the fouled out Drew Greene and helped East lock down on defense. Both teams scored only four points across the four-minute playing time, while the bleachers quaked with cheers as the game continued.

The second overtime period had its fair share of drama as well. East got off to a good start, finishing at the basket and giving Cherokee fits on defense. Matthews got a technical foul with two minutes remaining, a display of the intensity this game brought from both sides. Jake Green converted several free throws as well.

But, the unsung heroes of the game were juniors Ben Adler and Noah Rose. The center and point guard took control of the game in overtime, as Adler gathered over five rebounds and Rose had multiple steals on top of a terrific showing at the charity stripe.

“I knew I needed to be ready for a situation like this,” Rose said after the game.

The Cougars hope to continue their win streak as they face off against Seneca on Thursday evening. The Cougars are mounting lots of momentum with the playoffs looming.