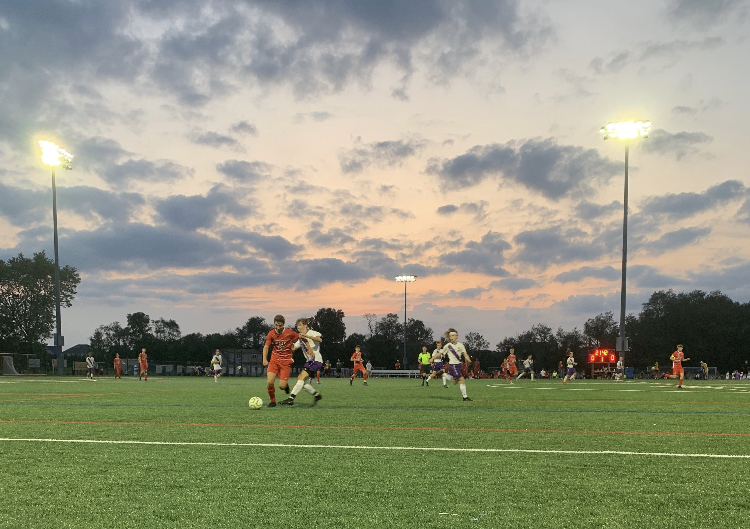 The East Cougars and the West Lions fight for the ball, on the soccer field.

The East Cougars and the West Lions battled it out on the soccer field, on Saturday, September 28, at the Decou Field Complex.  The game ended with a tie of 1-1 after two intense rounds of overtime.

In the very beginning, the West Lions received the ball from a kickoff. However, they quickly turned the ball over to the East Cougars, giving them an opportunity on offense. The East Cougars stayed strong and fought to keep the ball.

Throughout the first half, both the West Lions and the East Cougars strived to score a goal, but the score remained 0-0, until the second half.

During the second half, the East Cougars made a strong showing. In the beginning of the half, there were a few attempted shots by player Eddie Grant (‘20), Adam Blumenthal (‘23) and Nick LaRusso (‘19).

However, halfway through the second half, Jakub Samelko (‘23) received a direct free kick.  He then crossed the ball over to Hank Feudtner (‘21), who headed the ball into the net for the Cougars’ first and only goal of the night. The East fans in the crowd was ecstatic. The goalie, Matt Randall (‘20), also made a solid save nine minutes before the half was over.

“Leading this game was huge. The last six games have been one-goal contests between East and West.  Having the first goal was a huge advantage,” said Boys Varsity Head Coach, Mr. Michael Melograna.

The goal elated the crowd and motivated the players for the remainder of the second half, but with roughly two minutes left in the game, the West Lions scored a goal, leaving the crowd on the edge of their seats.

After the West Lions scored, no additional goals made it past the goalies’ fingertips during regulation, pushing the game into overtime.

As overtime got underway, the crowd cheered and showed their respective support for the Cougars and Lions as the two teams tried their best to conclude the game with a winning shot.  Although both the teams were persistent and put their hearts and souls into the game, no additional goals were scored by the end of the first overtime.

During overtime two, two players got injured.  However, they both made their best efforts to stay strong and push through the pain. These determined players were Kevin Lochbihler (‘20) and Ben Utter (‘20).  After a nerve-racking second overtime, both teams failed to score. Therefore, the results remained the same, leaving the game with a score of 1-1.

Despite the tie between the two opponents, the players were continuously determined and persevered through the entire game. The attitude of both the players and the crowd, proved the night to be momentous.

“It was an incredible atmosphere last night..[there were] hundreds and hundreds of fans….[It was a] very special night as we honored our senior class,” said Mr. Mike Melograna.