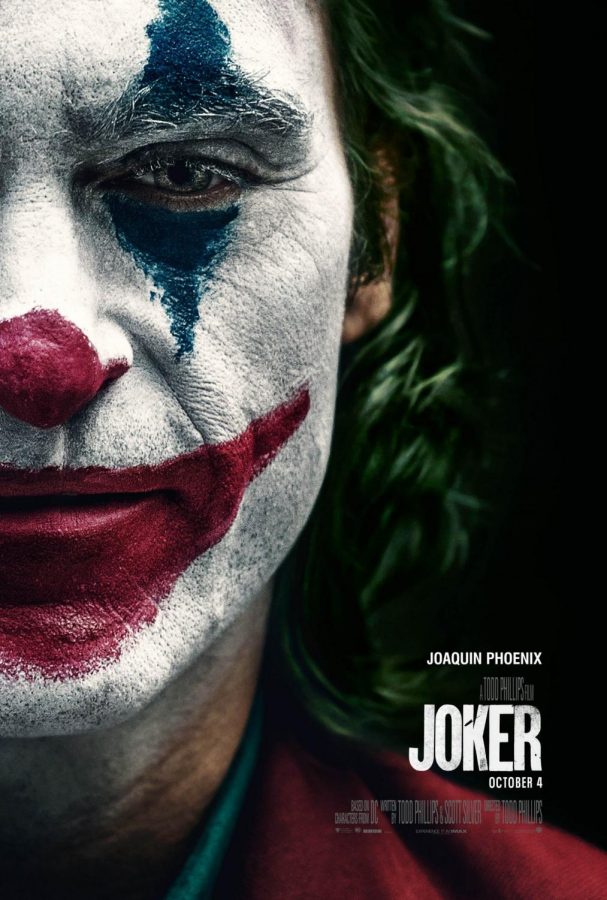 A new movie, entitled The Joker, just came  into theaters. The Joker, a well-known comic book character, was portrayed by Joaquin Phoenix, an award-winning actor, and directed by Todd Phillips.

The movie delves into the complicated life of the Joker. The whole movie jumps the line between reality and internal hallucinations by the Joker, creating no definite ending, so many different theories arise from this ambiguity. The movie shows the Joker’s ability to skip in and out of reality, and the viewer never knows whether the scene that’s occurring in front of them is real or rather a figment of Fleck’s (the Joker’s real name) imagination.

The movie begins with the Joker outside in Gotham City, a replica of New York City’s Times Square. In the scene, we see Arthur Fleck spinning a sign for something, when a group of teen boys run and hit him, stealing the sign. Fleck follows the boys all through the heavily crowded streets, chanting for help, yet receiving none. During the chase, Fleck calls for help, but no one does. Finally, he ends up in an alley with the group, where they attack him and run away. This scene brings great emotion, watching Fleck call for help and getting ignored by society is heartbreaking. This scene makes Fleck seem like just a hurt person, not a mentally derranged killer.

Afterward, we see Fleck as a more clinically insane man. He goes to a therapist but the sessions seem to not help, as he “kills” (it is unclear if this is a halucination) his therapist. He laughs at her. Through the movie, Fleck uses this iconic maniac laugh all the time. These laughs invoke fear but also pity.

As seen in the scene in which he is preparing for a comedy show, he holds the ends of his lips and pulls them into a smile. Then, a frown, back to a smile. As he does this, a tear comes from his eye. This scene too is captivating, as you see him as a human being, although he has serious problems. It is very clear his emotions through the shows are fake. None of his laughs were genuine, and neither were his smiles. The whole clown persona represented his mask of emotions and the fakeness of everything about him. The movie depicts how society frowns upon him, and what that does to his brain.

In the movie, his dad deserts him, leaving him with major emotional trauma. Early on, Fleck imagines himself at the Murray show, a popular talk show, and Murray says that he would be lucky to have Fleck for a son. This represents a small piece of his trauma. It also foreshadows the “real” visit the Joker takes to the Murray show. However, we don’t know if any bit of his story was real. Did he really go on the show, did he really kill anyone, did he ever feel anything? I see it as a mentally ill man who dreamed of having leadership over people to start a rebellion or change.

It was a very powerful movie. Joaquin Phoenix’s ability to portray such a role is spectacular. We see at the end the Joker says, “You wouldn’t get it.” Does this mean that this man was not the real man who killed Bruce Wayne’s parents, creating batman? Was he rather just a man who inspired the Joker. Producer Todd Philips says the Joker who killed Batman’s parents could have been anyone. Arthur Fleck, someone who followed him, or even someone in the background of any scene. This general idea I think was a brilliant twist. I think the movie was extremely well done. From the camera angles to the stunts, to the overall acting. I would recommend this movie.