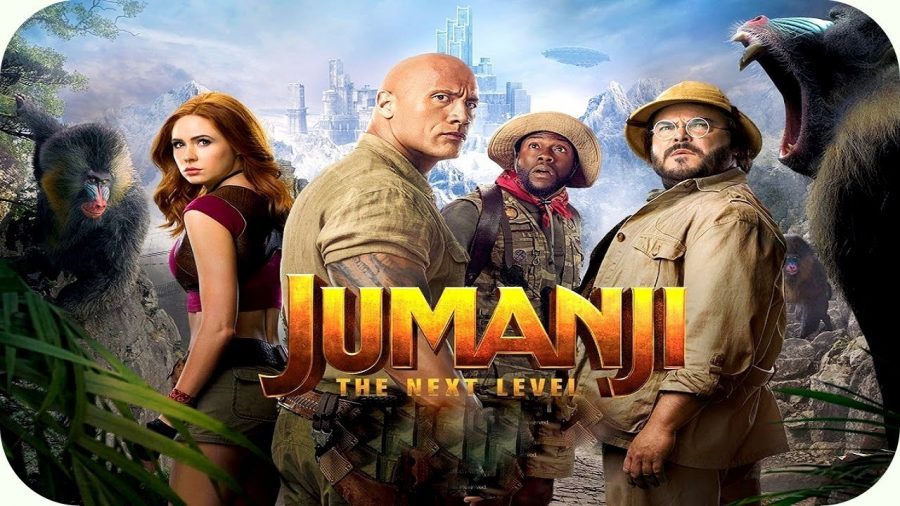 Movie poster of Jumanji "The Next Level," showing the stars of the film.

Jumanji “The Next Level” is a fantasy film was released on December 13, 2019. It takes place three years after the original, Jumanji: Welcome to the Jungle.

The story line centers around a once closely united group of friends that began to detach from each other as they moved in separate directions in their life after high school.

The original group of friends, Spencer Gilpin, Anthony Johnson,Martha Kaply, and Bethany Walker plan to meet up for a reunion. When it is apparent that Spencer does not arrive, the group immediately retraces his possible steps back to his house, and the situation is clear that he has re-entered the game Jumanji, where the humans enter into a video game in real life.

A creative quality seen in the beginning stages of the film is the reference to today’s culture. In the first few scenes, it is revealed that the underlying reason why Spencer does not plan to attend the reunion is his depression. He liked transforming into the more physically powerful Mr. Smolder Bravestone in “Welcome to the Jungle” so much, that he reveals that he never felt better. He said that he felt so free and able to do anything, and in comparison, he felt weak and depressed in his own body.

Upon returning to the game, Spencer, played by Alex Wolff, falls into a frenzy of insecurity, failing to recognize his own importance and becoming exasperated after visiting his girlfriend’s social media profile and thinking that her life is better than his. He wishes for his girlfriend, Martha, played by Morgan Turner, to return to the game, which she does. This reference is significant because these feelings are prevalent in today’s society.

Another aspect of the film making it exciting was the nonstop action, which started as soon as the group of friends returned to the game. Upon arrival, they were immediately chased by wild ostriches, leading to a heart pounding race as they tried to escape the flock.

Also, much like the first movie, ominous lines appeared on the castmembers’ arms that made it much more exciting as they hinted that at any moment the heroes could be eaten by savage creatures or accidentally misstep a boundary, and fall. The object in their race is to return “the falcon’s heart” necklace before they will be forever trapped in the game.

The villain played by Rory McCan adds to making the movie so highly enjoyable. It is mentioned that his character “Jurgan the Brutal” is expecting to be married by the Brothers Kebabic sister, played by Fridge and Bethany. Whether they will be able to pull off deceiving the king yields anticipation and excitement.

“The Next Level” is an admirable successor to the first movie, and broadens the characters’ development.

This film is highly recommended for all audiences; people who like action as much as humor. The plot keeps those interested throughout, and humor was added in making the movie more exciting.