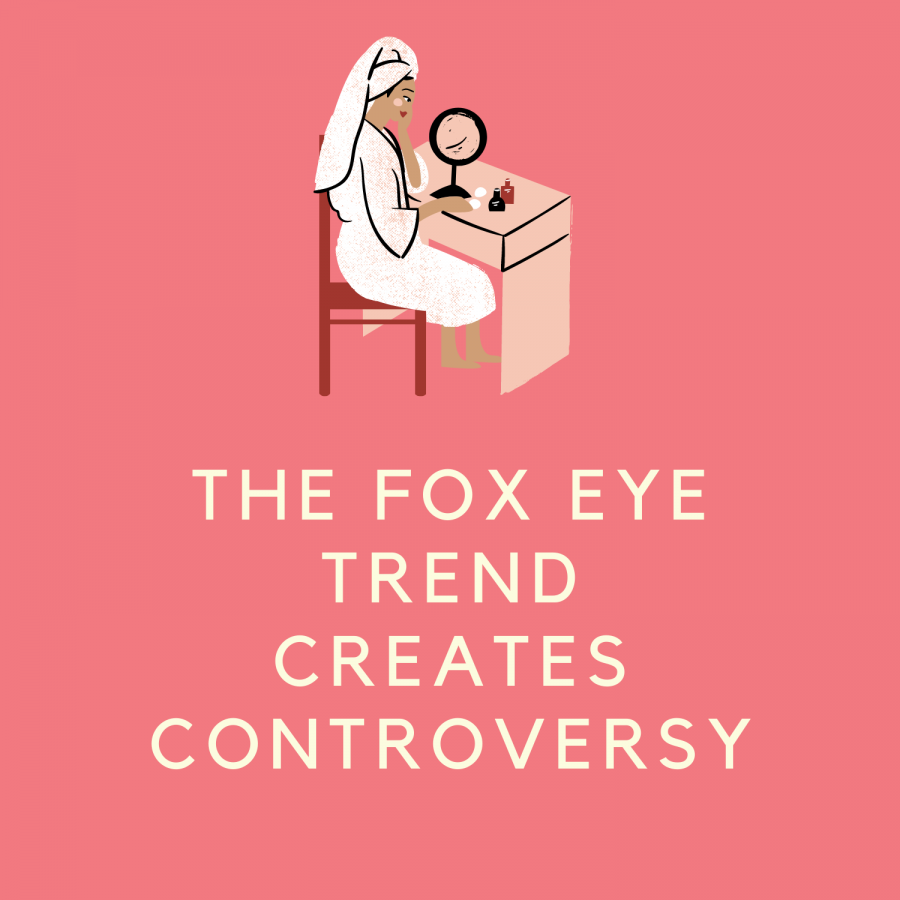 “Calm down, it’s just a joke.” “Why are you so angry?” “Don’t take everything so seriously.” These are some of the phrases Asian Americans are responded with after building up the courage to take a stand and speak up about a more-than-ever popular makeup style: the fox eye trend.

The fox eye trend began to popularize on the Internet at the beginning of 2020. Since then, it has continued to take over social media platforms—including Instagram, Twitter, Youtube, and TikTok, which currently has 63.8 million views under #foxeye. Many celebrities have participated in this trend, which some say originates its popularity, including Bella Hadid, Kylie Jenner, and Emma Chamberlain.

This 2020 makeup appearance includes styling the eyes and eyebrows in a way so that they give a more slanted, elongated, and almond-shaped look. This often includes using makeup to create a raised eyebrow and sharp eyeliner, which in turn generates the image of an upturned eye shape. After applying the makeup, most participants will post a picture of them using their hands to pull back the end of their eyes, towards the temples on either side, to give an increased illusion of slanted, or “fox eye” shaped eyes.

Following the flow of posts that have filled #foxeye, the trend sparked controversy within many Asian Americans and supporters. People have turned to social media to explain how the fox eye trend is offensive to those of the Asian race, affiliating the gesture of the trend with racists making fun of the almond-shape which many Asian eyes resemble. The makeup style of the trend has also been associated with mocking of the slant and straightness of Asian eyes. In a little less than a week, both the fox eye style and pose have been deemed as disrespectful and racist to the Asian community.

A large reason why the fox eye trend is identified as offensive and racist is due to the history of the gesture that is pulling the outer corners of the eyes towards the temples. In the past, Asians have often been ridiculed because of the shape of their eyes, which were labeled as “small”, “narrow”, and “slim”, in negative manners for all. Recently, however, it seems as though the fox eye trend is essentially putting the shape of Asian eyes in a positive light.

One may argue that the fox eye trend portraying Asian eye shapes as a desirable feature is not something to be deemed as offensive, but rather appreciative. The trend, however, does not spark gratitude for the reason that many Asian Americans have had extremely unnerving experiences with others using the same gesture as the fox eye trend.

As an Asian American high school student, I recall being mocked for the shape of my eyes in elementary school, as do many others. As I grew older, I remember others telling me that my eyes were “not that Asian”, as I assume was intended to be taken as a compliment. This compliment, however striking me with pride in the moment, later made me understand just how much discrimination of the Asian race, such as the fox eye trend, had been normalized.

The fox eye trend may not have been created for the purpose of offending the Asian race, but unfortunately, because of the many disheartening experiences in which we share, has risen to an uncomfortable level. Personally, it is not the makeup style itself that offends me, rather the fact that others of non-Asian races hold the power to decide whether or not Asian features have the ability to be portrayed in a positive or negative light, such as the shape of our eyes.