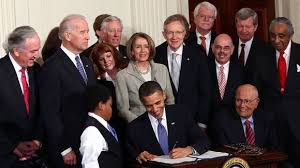 Almost all students know the words of John Locke: his idea that all people are entitled to “Life, Liberty, and Property.” Those same principles, albeit slightly changed, proved to be some of the founding notions of this nation.

The purpose of a government is to protect its people, is it not? The Constitution itself states that “in order to form a more perfect Union” we must “promote the general welfare.”

Which is why the Affordable Health Care Act (ACA) is beneficial to this nation. Passed in 2010 by former President Barack Obama, the ACA ensures that all people have the right to health insurance.

Prior to the ACA, 80 percent of Americans were on private or employment-based health insurance. The other 20 percent were on their own. Either these people couldn’t afford health insurance, or they couldn’t receive it because of pre-existing conditions (i.e. diabetes or cancer).

“It gave a new affordable option to a lot of folks who never had options before,” Obama said in a 2016 speech.

So, why does it matter? Shouldn’t everyone have health insurance then?

The uninsured rate in America, or the percent of Americans without healthcare, was at 8.8 percent in 2017 according to the Census Bureau.

“I have always said that for all the good that the Affordable Care Act is doing right now — for as big a step forward as it was — it’s still just a first step” said Obama in 2016.

The ACA was not intended to be flawless. Right from its inception, changes have been made to the plan over the last nine years to improve it.

Perhaps the biggest problem people had with the ACA came from conservative ideologies that government should not meddle in the private lives of citizens. However, it is the job of government to protect its citizens, and that very ideology is part of what this nation is built on. The ideas of Locke and Montesquieu, on which the founding fathers based the Constitution and Declaration of Independence, both call on governments to protect their citizens.

And as society evolves, shouldn’t what is defined as a ‘right’ evolve, too? Does health insurance not fall under the basic right of ‘life’? Government should concern itself with matters that deal with the people and their lives. Its role in protecting the people applies to protecting their lives.

“Before the Affordable Care Act, people were not secure in their health insurance coverage” said Dr. Alice Chen-Plotkin, a professor at the University of Pennsylvania. “Insurance companies could decide to cut off a person’s care even if they paid premiums for years.”

Further opposition to the ACA argues, “why should one person pay taxes for someone else’s health insurance? Why not just let someone fend for themselves?”

And just saying “Oh well” to someone who can’t afford health insurance is not fair. What if the person who one day has to fend for themselves is a friend? Or a relative? Then the circumstances would change, no?

Repealing the act, as Republican congressmen and women have been threatening for years, is not the answer. The ACA provides numerous benefits to all Americans, even those on private insurance plans. To repeal or minimize it would damage the economy and might bring thousands of American citizens to bankruptcy.

“We fought to make sure that in America, health care is not just a privilege, but a right for every single American” said Obama.

And he’s right. Health insurance is an American right. After all, does health not fall under the foremost word of “Life, liberty, and the pursuit of happiness?”