Teacher tenure is essential to our education system 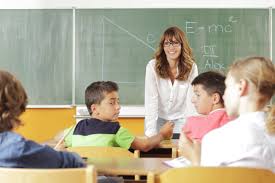 Teacher stands at the front of the class during a lesson.

Congratulations, teachers! Once you attain tenure you cannot be fired and you can stop
trying. Well, at least that’s what most people think.

Tenure has become a very controversial topic lately because of the assumptions
associated with the term. Many will argue that tenure creates bad and lazy teachers that
no longer have to prove themselves or fear termination, but in reality tenure rewards good teachers.

Tenure is a form of job protection that is granted to teachers in 46 states. Before teacher
tenure was created, educators could be hired or fired on a whim. For example if older, more
experienced teachers became too costly, the schools could fire them for a younger, cheaper
replacement. Tenure also prevents firing because of political beliefs or other non-work-related
reasons.

Although tenure is a good policy, it has become a stigma. Teachers gain the ability through
tenure to teach more freely and relaxed. Teachers can experiment with different teaching methods
and lesson plans to help their students thrive; without tenure, teachers may not take the risk to deviate from a standardized lesson plan for fear of termination. As expressed by business teacher at East, Mrs. Leanne Shine said it gives teachers “helpful latitude to do more relax teaching”.

Tenure is used as the scapegoat for the problems with our schools. Abolishing tenure will
not make classes smaller, stop overcrowding, or end the chronic underfunding of our schools.
All of the students interviewed had an idea of what tenure was, but could not go into depth about it. Of the three students interviewed, they all thought that tenure should be modified. For example, Paige Miller, (‘21) thought that the process has faults but said “job security is important as well”.

Since most occupations do not have tenure, many believe that this protection will remove a teacher’s incentive to continue to work hard and protect them from reckless behavior. Contrary to popular belief tenure does not guarantee a lifetime position as a teacher, but it does prohibit teachers being fired prematurely in cases when a student makes a false accusation against the teacher. Without tenure, school districts may terminate teachers by not properly investigating the accusation to avoid a lawsuit from the student’s family. Teachers with tenure also have the ability to advocate for students even if that means siding against the school. Teachers that do not have this protection would be less inclined to stand up for the students because of the fear of getting fired.

Once teachers are granted tenure it can be hard to remove them, but tenure is a reward.
Teachers that do not meet the expectations of the schools do not have to be granted tenure.
Therefore, tenure is not to blame for lazy, bad teachers. The principals and school board are responsible for properly evaluating the teachers worthy of tenure, and dismissing the bad teachers before the tenure is granted. For the most part the blame for tenure falls
to them, not the policy itself.

Because tenure allows teachers to do their job to the best of their ability and provides
educators with valuable job protection, taking tenure away from teachers could be
detrimental to the education system in our country.