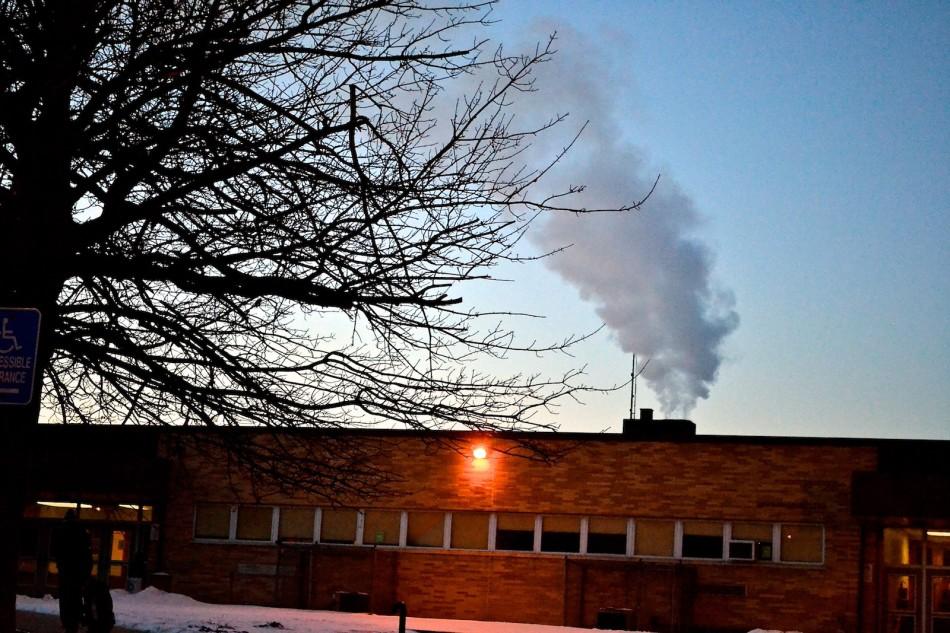 On cold mornings, dark grey smoke, produced by the burning of fossil fuels, can be seen rising above East’s roof.

During the summer of 2014, the Cherry Hill School District will be renovating the schools by adding new roofs and new heaters. These new heaters will still run off of fossil fuels, however they will be 15% more energy efficient. Although these heaters will be better than the old heaters, they are still harming the environment, but at the same time, helping the school.

These new heaters, called HVAC (heating, ventilating and air conditioning), will regulate temperatures across the building to keep them consistent. Currently, different parts of the school have very different temperatures. For example, D-wing is often freezing cold, while at least one room in 2nd-floor C-Wing–C216–has had to keep the windows open for much of the winter to combat the extremely hot air being pumped out of the heater.

HVAC heaters, small and inexpensive, enable the school to buy many of them, while not spending a lot of money. When the heaters need to release heat, they burn fossil fuels and release steam which can release the heat faster than the current heaters that East has.

The best kind of new heaters for East to get would be heaters that run on electricity. Electric heaters do not run through air vents, eliminating allergens like dust. They are also small, however since they run on electricity, the costs will be higher than an HVAC heater but safer for students and the environment since the electricity could be running off of a natural energy generator, like solar panels.

The cost of maintaining electric heaters will be higher due to the installation and replaceable filters. The electric bill would also increase since the heaters, lights and technology will be running off of electric. If the heaters were running off of fossil fuels, as they currently are, the district will just need to buy the inexpensive, nonrenewable resources that power the heaters.

Since the roof shelling on East will be replaced, it would be better for the district to go all out and upgrade the entire roof so it will be able to hold the weight of solar panels. The heaters would run off of the solar panels, making this decision better for the school district because the heating bill cost will go down. Solar panels also give a tax credit, which means that the government will pay Cherry Hill for using environmentally-friendly energy sources. While Cherry Hill will be getting money back, the administrators can start saving up for new projects that need to be taken care of once they pay off the installation costs.

In Illinois, over fifty schools have solar panels which generate electricity for the buildings. Schools like Arcola High and Hillcrest have six solar panels that are also used not only to power the school, but also to teach students about energy sources. In addition to tax credits given for solar panels, many private organizations also give grants to help schools install solar panels. For example, the Illinois Clean Energy Community Foundation has awarded more than $2,100,000 dollars in grants to schools to support the installation of solar energy systems.

Solar panels would not only generate electricity for the heaters, but also other resources like the computers, air conditioning, and lights. Even though solar panels would be extremely beneficial to Cherry Hill, the new roofs will have to be strongly reinforced for any of this to happen.

While Cherry Hill is renovating their new heaters and schools, lights and roofs will be replaced. These new heaters will be highly efficient compared to the heaters that East has right now. Since the district is taking the next step to getting better heaters, it would be greener if the schools got electric heaters as well as solar panels. This would be better for the environment and overtime, it will also save the school district a lot more money, and the district will also gain money from the government by using healthy, energy-efficient, renewable resources.