Pro Republica Online: Coalitions shouldn’t be on the ballot in BOE races 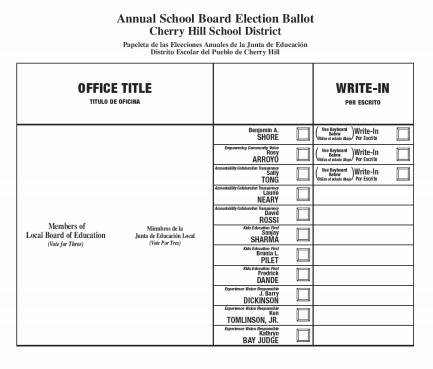 The opinions expressed in this article are the author’s own and do not necessarily reflect the views of the Eastside editorial board:

If George Washington is to be believed, party systems are an existential threat to our democracy. While it may yet be too late to save the United States from the constant feuding of the Democrats and the Republicans, there may yet be time to save the school board.

First, some background: school board elections are nonpartisan, but only in that candidates cannot declare themselves as Democrats, Republicans, Libertarians or Greens. In the past, this led to a truly independent jungle election, where everyone competed against everyone else for the three available seats on the Board of Education. Recently, not so much.

Eleven candidates ran for a seat on the board, and of those eleven, nine ran on a group ticket, or slate (the independent candidates being East alum Benjamin Shore (‘18) and Rosy Arroyo, both of whom lost). While people could vote for any candidates, including individual candidates in a coalition, the results show that slate candidates finished very close to each other, with exceptions only in extenuating circumstances.

The winning three candidates, Sally Tong, David Rossi and Laurie Neary, ran on a slate ticket promising “accountability, collaboration and transparency” (ACT, as the Cherry Hill politicos call it). They won with 15, 13 and 12 percent of the vote, respectively. Incumbent Kathryn Bay Judge came in fourth, followed by the independent Arroyo and incumbent Ken Tomlinson, Jr. (the separation between Arroyo and Tomlinson was less than 40 votes). J. Barry Dickinson, the former Board President, was an anomaly, coming in at ninth place, likely due to reports of him removing an ACT sign from the ground. The other candidate slate, “Kids’ Education First” was separated by Dickinson and Shore in the vote, but remained close.

As proven, coalitions are not necessarily kept together in the vote count, but by the definition of their existence, they set three dangerous precedents.The first of these precedents is group campaigning for BOE. This allows candidates to make a collective push and presentation and may allow certain candidates to persevere through the election process on a group ticket who have not been properly introduced to the voters, simply by association of similar values. Especially in New Jersey, voters tend to vote for a candidate by party association and not for the candidate themselves (e.g. the re-election of Robert Menendez to the Senate, where according to Pew Research Center, a majority of constituents voted for Menendez because he was a Democrat). If we want to avoid polarization settling as precedent in the BOE elections, we need to nip coalitions in the bud now.

Another dangerous precedent set was that the coalitions are marked on the ballot by their slogans. In an election where there are limited opportunities for people get to know candidates beyond yard signs and a solitary candidates forum, putting names on candidate slates on the ballot leaves the chance of voters just choosing what sounds nice. Maybe next year, my friends and I can run on the Unicorns and Rainbows ticket and get elected because who doesn’t love unicorns and rainbows? Even with Democrats and Republicans, one has a general sense of their party platform. This is purely slogan voting.

Perhaps the most dangerous of all, however, is inter-slate accountability. If we allow slates to continue, there’s a strong chance that members of the slate will be persuaded to vote with their slate, completely undermining an independent school board. Are we ready for BOE whip counts?

What I’m saying is this: we need an independent school board. In an increasingly polarized and political world, we need people detached from group campaigning and accountability making decisions about our education. Political groups in education gave us No Child Left Behind, the god-awful Common Core and a dearth of fair funding. Independent legislating gives the district the chance to blaze its own path.
So, pro republica, can we keep it that way? Pretty please?