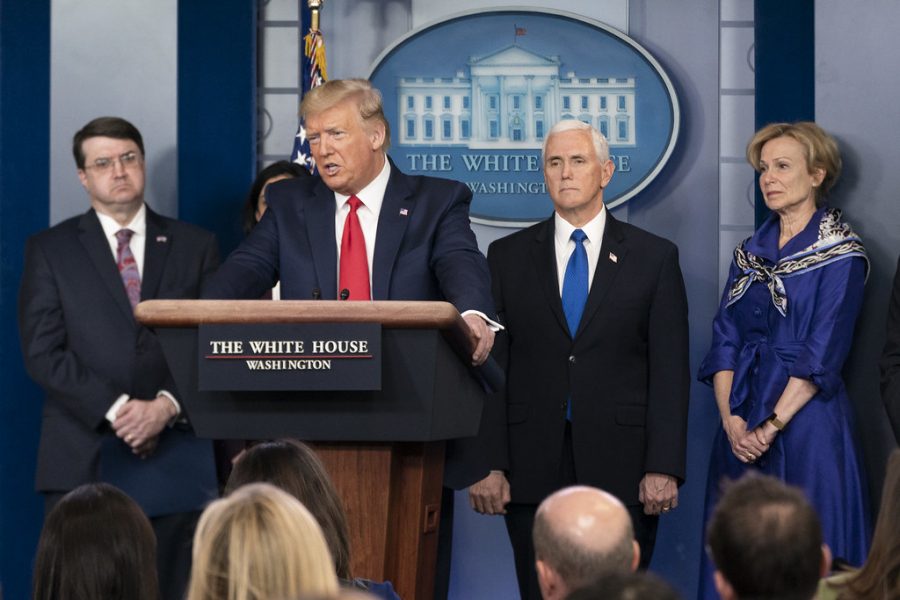 Donald Trump talks to the press on the COVID-19 pandemic.

The people are listening, and they are evaluating. After months of publicized inefficiency at all levels of government, the Trump reelection effort has hit a snag; a recent Reuters/Ipsos poll of Michigan, Wisconsin, and Pennsylvania showed former Vice President Biden with a 45%-39% advantage over the incumbent president.
President Trump proudly references back to the 2016 election often when polling is discussed; former Secretary of State Hilary Clinton was given a 99% chance to win the election, according to the Princeton Election Consortium, and yet Donald Trump was sworn in as president on January 20th, 2017, not Hilary Clinton. But even when the specifics in polling are wrong, trends provide evidence of a shifting mentality among voters.
A newly-released Emerson College poll shows a 10% drop in approval of President Trump’s handling of the coronavirus outbreak. Notably, the difference in general election polling remains constant at 6%. This supports Trump’s assertion that the general election has not become a referendum on his administration’s response to the pandemic.
Nevertheless, recent internal polling results indicate that the Trump reelection effort may have become more complicated due to Trump himself. Senior citizens are among the most vulnerable people to the coronavirus due to their weakened immune systems, but they are also overwhelmingly conservative and, more importantly, vote in nearly every election. Perhaps unsurprisingly, their priorities are deeply in conflict with President Trump’s. They have become “the group most disenchanted with Trump’s handling of the crisis” as they believe defeating the coronavirus takes priority over opening up the economy by nearly a 6-1 margin, according to Josh Kraushaar of the National Journal. Perhaps that’s why seniors’ net approval of President Trump has dropped 20% in only a month, trailing only the youngest Americans in disapproval percentage.
Senior citizens have long been a dependable demographic to count on in the Republican party, and while long-term their support is predicted to stay on the right, the upcoming 2020 election is a short-term mission, and recent polling indicates that their unconditional support for the conservative candidate might finally disappear. A recent NBC/WSJ poll, testing the presumed general election matchup of Biden v Trump for the presidency, found that Biden actually led Trump by 9% support. Only four years ago, the senior vote sided with Trump over Clinton by a 52-45 percent margin.
These recent revelations have shocked the Trump campaign into action. Axios reports that the president plans to reduce his interactions with the press at coronavirus press conferences, which have become must-watch television for anyone looking to see Trump lash out at the media for their coverage.
One advisor to the president says, “I told him [the marathon televised briefings are] not helping him” as “seniors are scared…and the spectacle of him fighting with the press isn’t what people want to see.” What people do want to see is Dr. Anthony Fauci, the director of the National Institutes of Health and Dr. Deborah Birx, the Coronavirus Response Coordinator for the White House Coronavirus Task Force concisely answer media queries while providing facts, not speculation or conspiracy theories. But in the mess that is the White House’s response to the pandemic, Trump retweeted a conservative’s call to #FireFauci, and then had his deputy press secretary deny there was any evidence of Trump’s desire to #FireFauci. Even more confusingly, Trump publicly contradicted Fauci by claiming that the United States currently tests enough civilians to contain future outbreaks. All evidence, including Fauci’s statement that we need to “significantly ramp up” testing, points to the contrary.
The Trump administration in the end is making a smart move by pivoting Trump’s messaging to focus on the economy. Before the pandemic, the stock market was soaring and unemployment was at or near historic lows for many groups. Trump should focus on what he knows best and leave the technical pandemic topics to his trusted advisors if he hopes to maximize his support in the upcoming election. Otherwise, the candidate Trump describes as “incompetent” might just take his spot in the Oval Office next January.