Extravagant Promposals: Too Much Pressure 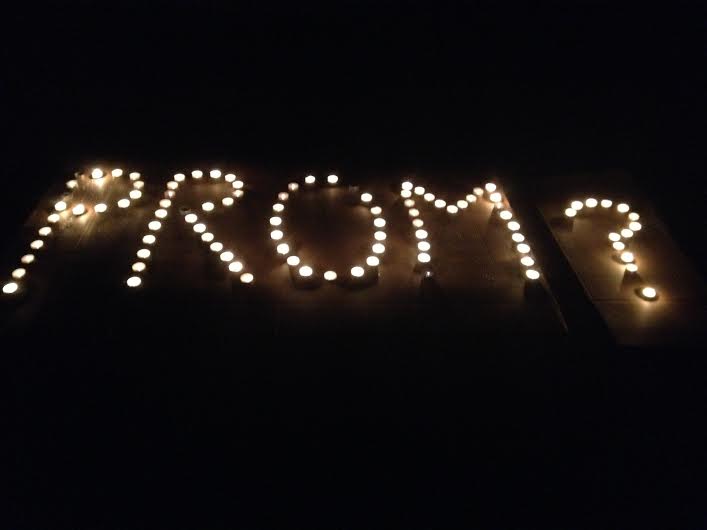 Proposals are sometimes too extravagant.

Candles are lit, balloons are floating through the air, fireworks are exploding in the background. Suddenly you look up and there’s skywriting above spelling out your name in the clouds and you hear cheering and applause all around you. He gets down on one knee and asks the big question.

“Will you go to prom with me?”

Okay, so maybe it isn’t the traditional big question, but for juniors and seniors getting ready for the biggest dance of their high school careers, the promposal is practically a sacred rite of passage. The elaborate and extravagant ways of asking a significant other, or even just a friend to accompany one to prom are limitless. But maybe, now it’s time to instill some restrictions regarding the infamous promposal.

A clever poster with some candy talking about how “sweet,” it would be to go to prom is great, but the trends of buying one a pet with “prom?” written on its collar or covering one’s entire car with post-it notes that spell out the big ask is just unnecessary. (Also, guess who’s going to be the one who has to unstick the thousands of post-it notes after she says yes.)

Of course it’s a fun tradition and for many high school students, the one thing that gets them excited for a school event. Even the quietest kids who have never gone to a school event in their lives eventually succumb to the promposal pressure. But, you can still attain that great feeling of a promposal without hiring a bunch of people to paint “PROM?” on their bare chests.

The promposal has even gotten slack from other countries for the seemingly unnecessary ways to ask someone.  Pictures of elaborate marriage proposals are circling the internet with captions such as “will you get me Starbucks,” or other casual questions as a way to make fun of the American prom tradition.

Could it be that people are using these elaborate asks as a cover for the pressure that comes with putting one’s self out there? With rejection always a possibility and the decrease in this generation’s ability to communicate to one another, promposals could simply be acting as a substitution for the stress of actually talking to someone personally.

Extravagant promposals can be a fun way of showing someone just how much you like them and enjoy spending time with them, but so is asking someone using simpler means in a more personal manner.

Blow out the candles, hold on tight to your balloons, and stop the fireworks. Prom is about spending the night with someone you care about, so keep it personal this promposal season.