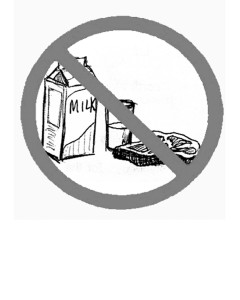 I’ve always toyed with the idea of veganism, but not being of the moral caliber to commit to anything so ethical, I never tried it.  When offered the chance to give up animal products for just a month, I jumped on the opportunity.

I’ve never been much of a meat-eater, so there was little challenge giving up red meat and poultry.  Forgoing fish and eggs, honey and dairy, which always wind up in the most benign foods (graham crackers!?), was slightly more tasking and meant reading through every package.

Still, it was a great culinary test.  Having so many foods pre-packaged for consumption made me complacent, so I relished the re-awakening of my dormant cooking spirit.  I tried all sorts of new dishes (swiss chard stir-fry, shitake crepes, panang cauliflower) and unheard of ingredients (romanesco, persimmon , tempeh). Even the treats most newly converted vegans mourn – ice cream, cookies – have a pretty tasty counterpart.

Trying out veganism also brought to my attention reasons to cut out animal products.  Documentaries like Food, Inc. and PETA’s site showed me the cruelty in the un-glamorous food industry, its environmental impact and the health benefits of a vegan diet.

Now that the trial period is over, I’ve given up my stint as a vegan, but haven’t forgotten the lessons.  I’m not officially abstaining from any foods, but I’m definitely trying to eat a diet much more wholesome for me, the animals and the environment.